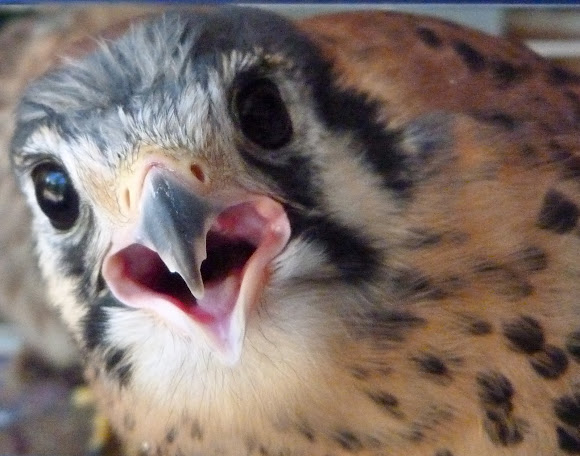 The American Kestrel, sometimes colloquially known as the Sparrow Hawk, is a small falcon, and the only kestrel found in the Americas. It is the most common falcon in North America, and is found in a wide variety of habitats. At 19–21 centimeters (7–8 in) long, it is also the smallest falcon in North America. It exhibits sexual dimorphism in size and plumage, although both sexes have a rufous back with noticeable barring. Juveniles are similar in plumage to adults. The American Kestrel hunts by hovering in the air with rapid wing beats or perching and scanning the ground for prey. Its diet typically consists of grasshoppers, lizards, mice, and other small birds. It nests in cavities in trees, cliffs, buildings, and other structures. The female lays three to seven eggs, which both sexes help to incubate. It is a common bird to be used in falconry, especially by beginners.

We saw three unrelated immature kestrels that had been brought into Reelfoot by members of the public that believed (probably incorrectly) they were orphaned & at risk. These two young males are to be released soon.

They are! Such amazing eyes! I look forward to seeing your photos Christy!
We are also extending the range of Maria dB's Wildlife Rescue & Rehabilitation mission so you might like to add them to that too http://www.projectnoah.org/missions/9974...

I've got some great shots of the birds at our center (birds-of-prey.org) and I will be asking my director if I can post some of them...we're pretty picky with the info that we give, so she has to approve the text that I write. It's amazing being close to predators! And screech owls pack a punch!!! (not to mention they're simply ADORABLE!!)

Hehe! Yes I got to handle the screech owl too (she brought up a pellet on my hand while I was holding her!), some of the baby turtles & an adorable little milksnake. I rarely post photos of captive animals but I will probably add a few more from there because it was such a great place I would love for other others to check it out.

Christy, the ranger we met at Reelfoot was absolutely fantastic! We took a guided boot trip on the lake with him to see the osprey & he took us right into the bayous so show us the wildlife there too - he even caught a watersnake to show us & held it so that we could take photos while it had its fangs sunk right into his hand! They take the educational animals around the local schools to give the kids a chance to see them up close & gain more of an appreciation for wildlife.

Rangers are great!! They always seem to go out of their way to educate the public! (I guess that's their job!) What a wonderful experience for you!!!

Maria, I agree. It is a pity. It's also a great shame that these birds were brought there in the first place but well meaning people who didn't realize they were perfectly able to survive on their own.

Sorry, I just saw your other comment Christy . No I'm not involved in any way. We visited the lake yesterday & one of the rangers was kind enough to show us the educational birds & herps they have there.

They have a few educational birds Christy including two bald eagles, a great horned owl & a screech owl that were brought to them injured & will never be released. A third bald eagle is due to be released this weekend. They also have three barn owl chicks & are hoping to release two. The third was brought in with a broken leg & will be kept as an educational bird. The other kestrel (a female) did not seem to have imprinted.

That would be sad. One danger of having birds raised by those who aren't wildlife rehabilitators is precisely that they might become too habituated. I hope it will be possible!

That sounds like imprinting...do they get many raptors?? I know it's hard if the center doesn't have the right facilities. Put them with some adult kestrels, and they'll get straightened out pretty quickly!!

They were unbelievable cute Maria - at one point I was trying to photograph one that was perched on my left hand while the other was perched on top of my camera! I fear they have become to habituated to humans for release though.

Are you a volunteer there, Karen?? I hope you get to be involved in their release!! That's a wonderful feeling!! ;-)
Great photos!