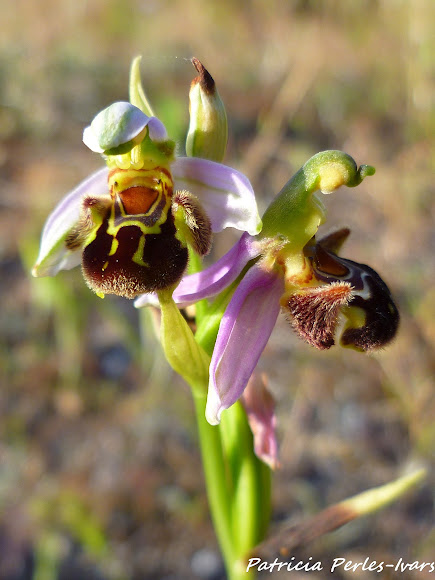 Ophrys apifera grows to a height of 15–50 centimetres (5.9–20 in). This hardy orchid develops small rosettes of leaves in autumn. They slowly continue to grow during winter. Basal leaves are ovate or oblong-lanceolate, upper leaves and bracts are ovate-lanceolate and sheathing. The plant blooms from mid-April to July producing a spike composed from one to twelve flowers. The flowers have large sepals, with a central green rib and their color varies from white to pink, while petals are short, pubescent, yellow to greenish. The labellum is trilobed, with two pronounced humps on the hairy lateral lobes, the median lobe is hairy and similar to the abdomen of a bee. It is quite variable in the pattern of coloration, but usually brownish-red with yellow markings

Ophrys apifera is a temperate climate species, widespread from the Atlantic to the Caucasus. It is quite common in the Mediterranean region eastwards to the Black Sea -generally grows on semi-dry turf, in grassland, on limestone, calcareous dunes or in open areas in woodland. It prefers calcareous soils, in bright light or dim light, , at an altitude of 1,200–1,400 metres (3,900–4,600 ft) above sea level.