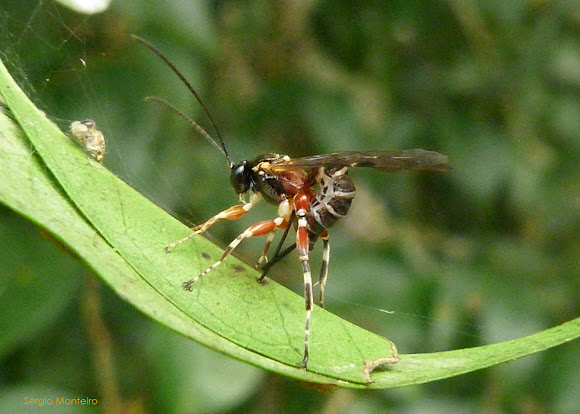 This Ichneumon wasp was digging holes in a leaf which was glued to another one by silk lines. It did two holes on line (numbers one and two in the third photo), with its rostrum, and then started a third hole. At this one, the wasp laid three small eggs (number three in the third photo) with its ovipositor. I checked latter carefully, for not to destroy the silk structure, and there was a small caterpillar inside.

Yes I do. Some wasps can oviposit into wood and must produce a very effective solvent. I'm interested that the wasp made two apparently inaccurate attempts to find its prey. Did the caterpillar move? Does the wasp species have some more evolving to do? Hmmm...

Thank you, Martin, your spotting was awesome too.It always awes me how these critters developed their behavior, and how they manage their tools (senses) to achieve their goals. I saw at both spottings that the edge of the holes is dark and somehow burned. Do you think that the wasp excretes some kind of chemical to soften the leaf's tissue?

Wow!!! Some caterpillars stitch leaves together for daytime protection or to pupate. This wasp has to "up the ante" and drill in order to get its eggs close enough to its prey. Brilliant series and fascinating story Asergio.