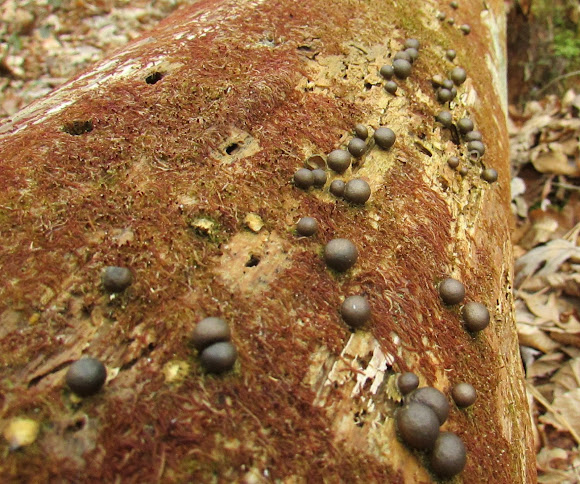 Small nodules (4-6 mm), with a dull, dark brown color and a leathery skin. These appeared to grow from cracks along the grain in an old, rotting log. When pressed, the fruiting body expelled a smoky cloud of spores. (Whitish spore material is visible in the third photo.)

Mixed hardwood forest in the central Appalachian Mountains. Found growing from cracks in dead wood. The species name epidendrum means "from or of wood."

Although these appear to be a fungus, they are actually a slime mold. The berry-like nodules are the fruiting bodies formed from an aggregation of plasmodial, single-celled organisms. These fruiting bodies are old. When younger they can appear pale to dark pink and ooze a pinkish slime if ruptured. Also called Groening's slime or toothpaste slime.