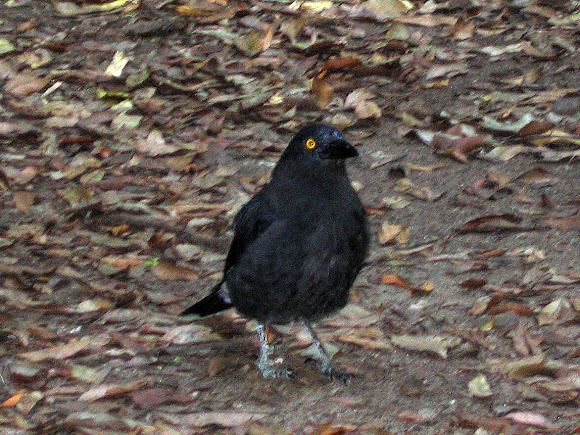 The pied currawong is generally a black bird with white in the wing, undertail coverts, the base of the tail and most visibly, the tip of the tail. It has yellow eyes. Adult birds are 44–50 cm in length, with an average of around 48 cm; the wingspan varies from 56 to 77 cm , averaging around 69 cm . Adult males average around 320 g, females 280 g. The wings are long and broad. The long and heavy bill is about one and a half times as long as the head and is hooked at the end. Juvenile birds have similar markings to adults but have softer and brownish plumage overall, although the white band on the tail is narrower. The upperparts are darker brown with scallops and streaks over the head and neck, and the underparts lighter brown. The eyes are dark brown and the bill dark with a yellow tip. The gape is a prominent yellow. Older birds grow darker until adult plumage is achieved, but juvenile tail markings only change to adult late in development. Birds appear to moult once a year in late summer after breeding. The pied currawong can live for over 20 years in the wild. (https://en.wikipedia.org/wiki/Black_curr...)

The pied currawong is common in both wet and dry sclerophyll forests, rural and semi-urban environments throughout eastern Australia, from Cape York Peninsula to western Victoria and Lord Howe Island, where it occurs as an endemic subspecies. In general, the pied currawong is sedentary, although some populations from higher altitudes move to areas of lower elevation in winter. However, evidence for the extent of migration is conflicting, and the species' movements have been little studied to date. It has adapted well to European presence, and has become more common in many areas of eastern Australia, with surveys in Nanango, Queensland, Barham, New South Wales, Geelong, Victoria, as well as the Northern Tablelands and South West Slopes regions in New South Wales, all showing an increase in population. This increase has been most marked, however, in Sydney and Canberra since the 1940s and 1960s respectively. In both cities, the species had previously been a winter resident only, but now remains year-round and breeds there. They are a dominant species and common inhabitant of Sydney gardens. More recently still, a survey of the population of pied currawongs in southeastern Queensland between 1980 and 2000 had found the species had become more numerous there, including suburban Brisbane. One 1992 survey reported the total number of pied currawongs in Australia had doubled from 3 million birds in the 1960s to 6 million in the early 1990s. (https://en.wikipedia.org/wiki/Black_curr...)