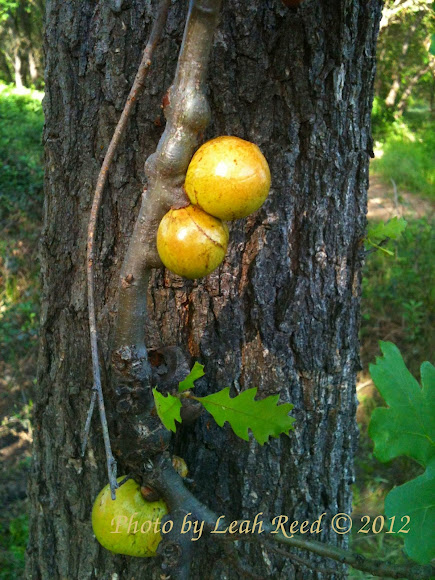 Any place you find oaks, you’ll find galls. Gall formation is often triggered by tiny wasps the size of fruit flies. A wasp lays an egg on a plant. The egg hatches and the larva begins to chew, releasing a chemical that triggers the plant to produce a specific type of gall. The oak is programmed by the insect to produce a particular structure made of plant tissue that it would not otherwise produce without stimulus from that insect. It’s literally programmed to build a nursery for the larvae.” Oak apples are among the larger galls. They look like potatoes clinging to the tree. Each can have 10 or more larvae inside. The developing larvae (of stinger-less wasps) attract weevils, moths and other insects looking for food. And those insects, in turn, draw lizards, birds and spiders seeking sustenance. The tree doesn’t benefit from this food-chain scenario, but it isn’t threatened by the galls either.

Oak galls were used by California Indians as an eyewash and dye, Russo said. He said some of America’s most historic documents, including the Declaration of Independence and Constitution, were written with ink made with galls from Turkey.

Hi Leah. Your words aren't quite right under description. In Australia oaks aren't native and so the ones that grow here are gall free. Same as for our eucalyptus. The gums that grow here have thousands of types of galls that I know they don't get overseas. Nice spotting - I'd love to see what's inside these.