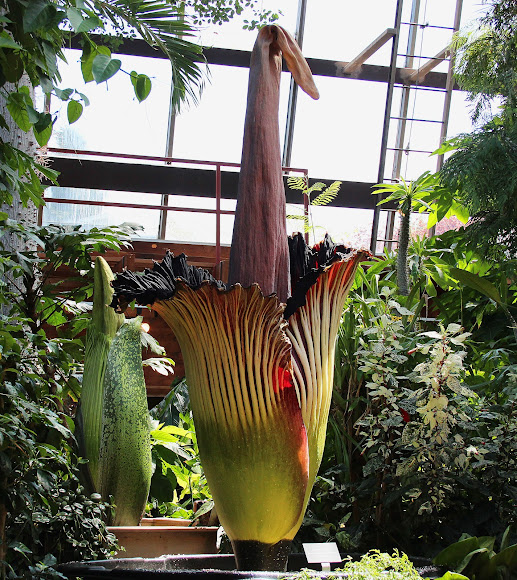 Native to the rainforests of western Sumatra

The flower had opened and began to collapse a lot faster than anyone had suspected. It opened quickly last night and, like everyone else, I thought we would get at least 2 days of it at its peak, but by 7am this morning, the top had began to collapse and the petals were closing in. So these are the best photos I could get of it because I missed it last night. The great news is that there is another Titan Arum set to bloom in the next 10 days or so and I'm not going to miss that opening. This Titan Arum was spotted at Niagara Parks Floral Showhouse. I work for the Niagara Parks Commission and had been following along with the flowers rapid growth since the beginning, though I only started to photograph it after it had already been growing for a few weeks. The NPC had 6 corms donated to it from Louis M. Ricciardiello, a hobbyist grower in New Hampshire. There are daily updates on the flower at Niagara Parks site http://blog.niagaraparks.com/news/worlds... I don't like to post spottings of cultivated plants but this is a very special and rare plant and thought it deserved to be shared and recognized. They are rare in cultivation and this flower is only the 151 ever to bloom. This spotting is also significant because it is my 1200th spotting!

Me too! Thanks Yuriana!

Im crazy about this!

If I still lived in New Hampshire, I'd sure consider it! I'm in Oklahoma now and that's a couple of thousand miles away. :-(

Thanks a lot everyone and peter for sotd!
@BalincaguinConservancy, yes, I've seen other species, thanks for linking those with this.
@Goody, there is another one to bloom in about 10 days, you could drive up for that one.
@keith, I'm not sure how big the seeds are. This one won't get pollinated because we don't have the natural pollinators and it is difficult to by hand.
@Ahish, this is Indonesian flora, we are just growing it in Canada.

Saw this one in WI ten + years ago. People came from all over the world to view it. It is interesting the history of its findings. I found this site:
http://en.wikipedia.org/wiki/Titan_arum

Thanks for sharing this organism with project Noah.. Dan... Canadian Flora is awesome....!!

How big are the seeds?

Cool that you got to see it! I saw one in Indonesia once; not a beautiful but certainly interesting flower!

Wow! I guess this would be worth staying up all night to photograph!

Congratulations; I had no idea this sort of plant existed, thank you very much for sharing the picture and comments =)

I would drive well out of my way to visit such a wonderful plant. Excellent photos and information!

Wow what an amazing story. It's incredible to hear that it's the first specimen to bloom in Canada! Thanks for sharing it with the community Dan, and congrats on spotting of the day!

"Known as the "corpse flower" because it smells like rotting meat, Titan Arum is a very special and rare plant. There have only been 151 ever recorded to bloom and it is also the world’s tallest blooming flower!"

@BalincaguinConservancy, it did smell! As soon as I walked in the door I noticed it. Thanks for the more specific links. Thanks Leanne and Viv! @ Daniele, thanks! I hope I can see it too in the wild. Turns out I did see them in Sumatra but they were in their vegetative stage, nowhere near flowering. Oh well, just a reason to go back there!

Vow! I hope one day you can see one in its native environment!

Fantastic images Dan.! Lucky you to be in the right place at the right time. I seem to recall a Titan Arum flowering at Kew a few years ago and they featured the event on UK national news.
CONGRATS on the 1200!

Oh my stars! What an awsome flower! I never even knew this existed. Thanks so much for sharing. Cant wait to see the next pics. Love it.

Looking forward to those shots... it looks a dirty sock in the first 2 photos, did it smell like one too?

Thanks! I will have some more shots later. This was just seen today.