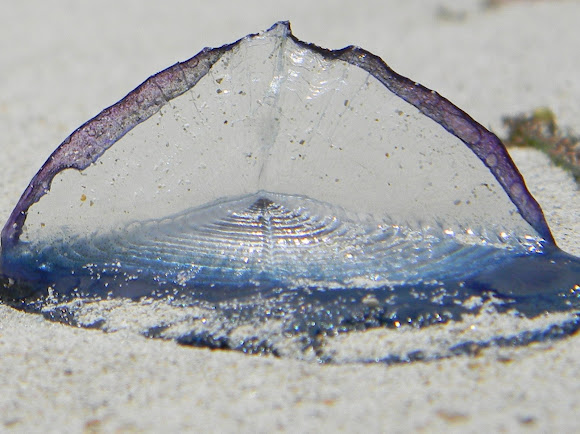 These small cnidarians are part of a specialised ocean surface community that also includes the cnidarian siphonophore known as the Portuguese Man o' War, as well as some specialized predatory gastropod mollusks, including nudibranchs (sea slugs) in the genus Glaucus and purple snails in the genus Janthina, all of which eat Velella. Each Velella is a hydroid colony, and most are less than about 7 cm long. They are usually deep blue in colour, but their most obvious feature is a small stiff sail that catches the wind and propels them over the surface of the sea. Under certain wind conditions, they can become stranded on beaches in the thousands. In common with other Cnidaria, Velella are carnivorous animals. They catch their prey, generally plankton, by means of cnidocyst (also called nematocyst) -laden tentacles that hang down in the water. Though the toxins in their nematocysts are effective against their prey, Velella are harmless to humans, either because their nematocysts are unable to pierce our skin, or perhaps because humans do not react to the toxins encapsulated in their nematocysts. Nevertheless, it is probably wise not to touch your face or eyes if you have been handling Velella.

just came across this spotting - what a beauty ! I've found hundreds of dried-up floats with sails but no live animals and definitely no colour at all....thanks for sharing this.
Our waters are too cold !

I have never seen anything like this in my life !
Well done for sharing such a unique creature.

Very interesting! I've moved this to Others for you.

This is amazing and beautiful; can you add any information about this species? Or perhaps a reference about it?

That is so neat! I have never heard of such a thing! Fantastic Spotting!

I have never seen one of these...great find and photos! Thank yo for posting in Florida's Flora & Fauna mission!