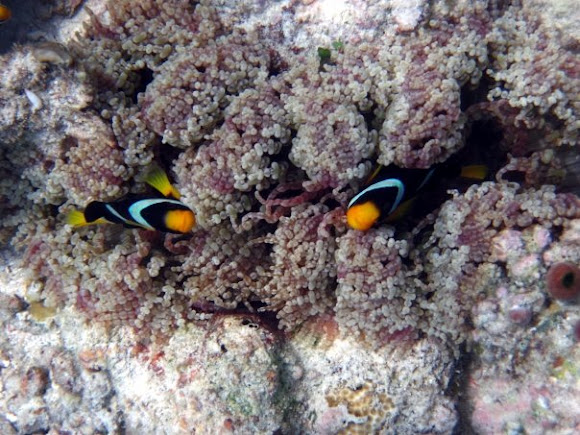 Clark's anemonefish or the Yellowtail clownfish (Amphiprion clarkii) is a widely distributed clownfish. It is found in tropical waters, in lagoons and on outer reef slopes, from the Persian Gulf to Western Australia and throughout the Indian Ocean and Pacific Ocean as far as Melanesia and Micronesia, and as far north as Taiwan, southern Japan and the Ryukyu Islands. Clark's Anemonefish is a spectacularly colourful fish, with vivid black, white and yellow stripes, though the exact pattern shows considerable geographical variation. There are normally two white bands, one behind the eye and one above the anus. The tail fin may be white or yellow, but is always lighter than rest of the body.

Symbiosis and mutualism Clownfish and sea anemones have a symbiotic, mutualistic relationship; each providing a number of benefits to the other. The individual species are generally highly host specific, and especially the genera Heteractis and Stichodactyla, and the species Entacmaea quadricolor are frequent clownfish partners. The sea anemone protects the clownfish from predators, as well as providing food through the scraps left from the anemone's meals. In return, the clownfish defends the anemone from its predators, and cleans it from parasites.[2][3] The anemone also potentially picks up nutrients from the clownfish's excrement, and functions as a safe nest site.[4] It has been theorized that the clownfish use their bright colouring to lure small fish to the anemone,[5] and that the activity of the clownfish results in greater water circulation around the sea anemone.[citation needed] Clownfish and certain damselfish are the only species of fishes that can avoid the potent poison of a sea anemone. There are several theories about how they can survive the sea anemone poison: The mucus coating of the fish may be based on sugars rather than proteins. This would mean that anemones fail to recognize the fish as a potential food source and do not fire their nematocysts, or sting organelles. The coevolution of certain species of clownfish with specific anemone host species and may have acquired an immunity to the nematocysts and toxins of their host anemone. Experimentation has shown that Amphiprion percula may develop resistance to the toxin from Heteractis magnifica, but it is not totally protected, since it was shown experimentally to die when its skin, devoid of mucus, was exposed to the nematocysts of its host.[6]