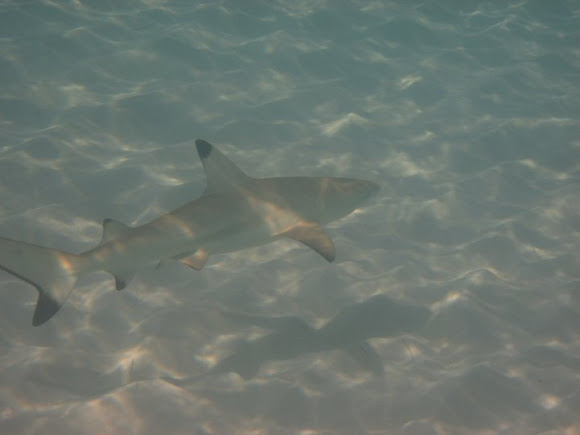 The blacktip reef shark (Carcharhinus melanopterus) is a species of requiem shark, family Carcharhinidae, easily identified by the prominent black tips on its fins (especially on the first dorsal fin and the caudal fin). Among the most abundant sharks inhabiting the tropical coral reefs of the Indian and Pacific Oceans, this species prefers shallow, inshore waters, and its exposed first dorsal fin is a common sight in the region. Most blacktip reef sharks are found over reef ledges and sandy flats, though they have also been known to enter brackish and freshwater environments. This species typically attains a length of 1.6 m (5.2 ft). Blacktip reef sharks have extremely small home ranges and exhibit strong site fidelity, remaining within same local area for up to several years at a time. They are active predators of small bony fishes, cephalopods, and crustaceans, and have also been known to feed on sea snakes and seabirds. Accounts of the blacktip reef shark's life history have been variable and sometimes contradictory, in part reflecting geographical differences within the species. robustly built species with a streamlined "typical shark" form, the blacktip reef shark has a short, wide, rounded snout and moderately large, oval eyes. Each nostril has a flap of skin in front that is expanded into a nipple-shaped lobe. Not counting small symphysial (central) teeth, the tooth rows number 11–13 (usually 12) on either side of the upper jaw and 10–12 (usually 11) on either side of the lower jaw. The upper teeth are upright to angled and narrowly triangular in shape, bearing serrations that are more coarse on the bases; the lower teeth are similar, but more finely serrated.[2][4] The teeth of adult males are more abruptly curved than those of females.[11] The pectoral fins are large and narrowly falcate (sickle-shaped), tapering to points. The sizable first dorsal fin is high with a curving "S"-shaped rear margin, and originates over the free rear tips of the pectoral fins. The second dorsal fin is relatively large with a short rear margin, and is placed opposite the anal fin. There is no ridge between the dorsal fins. This shark is a pale grayish-brown above and white below, with an obvious white band on the sides extending forward from above the anal fin. All the fins have black tips highlighted by lighter-colored borders, which are especially striking on the first dorsal fin and lower caudal fin lobe. Most blacktip reef sharks are no more than 1.6 m (5.2 ft) long, though rarely individuals may reach 1.8 m (5.9 ft) or possibly 2.0 m (6.6 ft).The maximum weight on record is 13.6 kg (30 lb).

he blacktip reef shark is found throughout nearshore waters of the tropical and subtropical Indo-Pacific.[4] In the Indian Ocean, it occurs from South Africa to the Red Sea, including Madagascar, Mauritius, and the Seychelles, and from there eastward along the coast of the Indian Subcontinent to Southeast Asia, including Sri Lanka, the Andaman Islands, and the Maldives. In the Pacific Ocean, it is found from southern China and the Philippines to Indonesia, northern Australia and New Caledonia, and also inhabits numerous oceanic islands, including the Marshall, Gilbert, Society, and Hawaiian Islands and Tuamotu.[8] Contrary to what most sources state, there are no confirmed records of this species from Japanese waters, and purported Japanese specimens likely came from Taiwan.[9] A Lessepsian migrant, this shark has colonized the eastern Mediterranean Sea by way of the Suez Canal.[8] Although it has been reported from a depth of 75 m (246 ft),[5] the blacktip reef shark is usually found in water only a few meters deep, and can often be seen swimming close to shore with its dorsal fin exposed.[2] Younger sharks prefer shallow, sandy flats, while older sharks are most common around reef ledges and can also be found near reef drop-offs. This species has also been reported from brackish estuaries and lakes in Madagascar, and freshwater environments in Malaysia, though it is not able to tolerate low salinity to the same degree as the bull shark (C. leucas). At Aldabra in the Indian Ocean, blacktip reef sharks congregate in the channels between reef flats during low tide and travel to the mangroves when the water rises. There is equivocal evidence that sharks from the northern and southern extremes of its distribution are migratory.

birdlady6000, sorry but I was out of line for few months. Yes it was a snorkelling photo.

Hi! Is this a snorkelling photo?