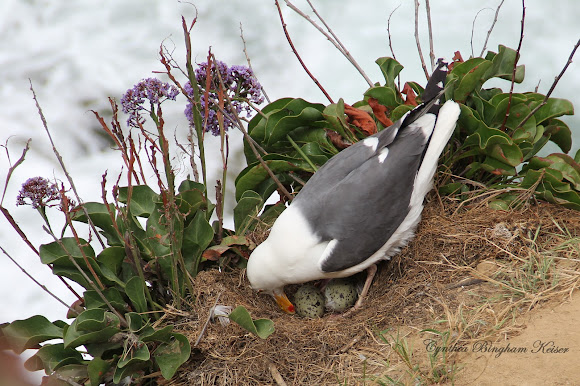 Female Seagull sitting on her nest with green eggs with black spots. "The Western Gull is a large gull, around 60 cm long with a white head and body, and gray wings. It has a yellow bill with a red subterminal spot (this is the small spot near the end of the bill that chicks peck in order to stimulate feeding). " - Wikipedia

Sandstone cliff above La Jolla Shores. "The Western Gull ranges from British Columbia, Canada to Baja California, Mexico, and because of its convenient colonies on the coast of California it is well studied. Despite being a well-known bird species on the West Coast of the US, it is of some slight conservation concern given its restricted range (for a gull)." - Wikipedia

"A nest of vegetation is constructed inside the territory, and three eggs are laid. These eggs are incubated for a month. The chicks, once hatched, remain inside the territory until they have fledged. Chicks straying into the territory of another gull are liable to be killed by that territory's pair. Chick mortality is high, with on average one chick surviving to fledging. On occasion, abandoned chicks will be adopted by other gulls." - Wikipedia

Thank you so much, Ava. This is one of my favorites as well.
Thank you too, J. Sorry I missed your comment... from a year ago :)

This is still one of my all-time favorite spottings; the subject, the colors, the backround -- it all works together so beautifully.

That is just astonishing! East Coast Gulls are so different!

She didn't even care I was there! A fence was between us and she was confident that I wouldn't pass it. :)

I cannot believe she let you get this close to her! Amazing Cindy!

Thank you Jeannette! I was very excited to find her in such a beautiful spot.

:) Thank you Ava and Atul! I put the exact spot on the map. It's on the Coast Walk trail. It was my first time on it and it's beautiful! This girl was just over the railing. I had my camera on full zoom and I cropped a little but a simple point and shoot would capture this one! I hope you get over there soon :)

absolutely superb series ! love these spottings of yours .

Cindy, this may be my favorite of all your spottings (although I do love the hummingbird babies a lot). Where exactly did you see this and how much zoom do you have on your camera? Lovely!