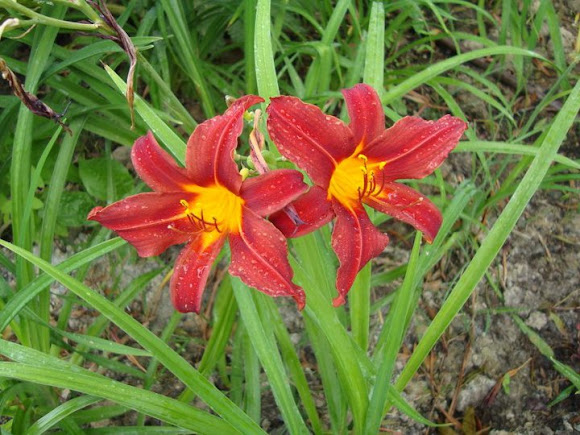 Daylilies are perennial plants. The name Hemerocallis comes from the Greek words ἡμέρα (hēmera) "day" and καλός (kalos) "beautiful". This name alludes to the attractive flowers of this genus which typically last no more than 24 hours. The flowers of most species open in early morning and wither during the following night, possibly replaced by another one on the same scape (flower stalk) the next day. Some species are night-blooming. Daylilies are not commonly used as cut flowers for formal flower arranging, yet they make good cut flowers otherwise as new flowers continue to open on cut stems over several days. Hemerocallis is native to Eurasia, including China, Korea, and Japan, and this genus is popular worldwide because of the showy flowers and hardiness of many kinds. There are over 60,000 registered cultivars. Hundreds of cultivars have fragrant flowers, and more scented cultivars are appearing more frequently in northern hybridization programs. Some cultivars rebloom later in the season, particularly if their capsules, in which seeds are developing, are removed.

This spot is from a botanical park in Angers, France