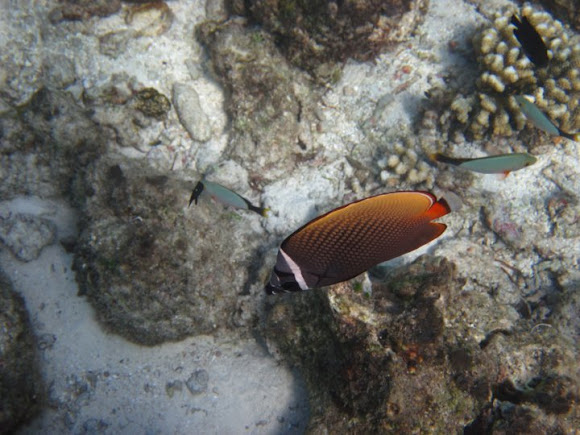 It can grow to 18 cm (over 7 in) in length. The Red-tailed Butterflyfish is brown to black, with lighter scales giving it a spotted appearance. It has a prominent, vertical white streak behind the eyes, a dark stripe over the eyes, and another, smaller white stripe in front of the eyes. The base of the tail is bright red, followed by a black stripe. The tip of the tail is diffuse white. In the wild, its diet consists of coral polyps. In captivity, it is a carnivore, taking fish meat and shrimp.

It can be found in reefs of the Indo-Pacific oceans: from the Persian Gulf and Maldives to Japan, the Philippines and Indonesia. It usually swims at depths of between 3 and 15 m.