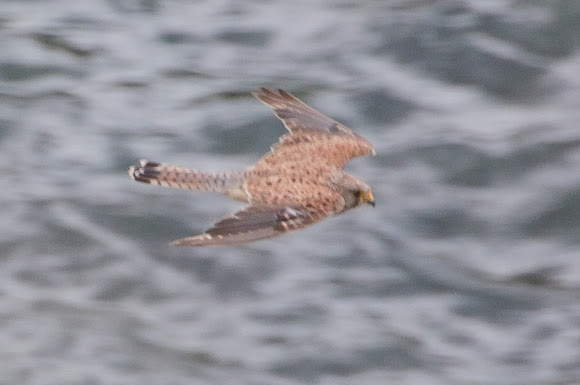 Adult female. Common Kestrels measure 32–39 cm from head to tail, with a wingspan of 65–82 cm. Females are noticeably larger. Like the other Falco species, they have long wings as well as a distinctive long tail. Their plumage is mainly light chestnut brown with blackish spots on the upperside and buff with narrow blackish streaks on the underside; the remiges are also blackish. Unlike most raptors, they display sexual colour dimorphism with the male having fewer black spots and streaks, as well as a blue-grey cap and tail. The tail is brown with black bars in females, and has a black tip with a narrow white rim in both sexes. The cere, feet, and a narrow ring around the eye are bright yellow; the toenails, bill and iris are dark. Juveniles look like adult females, but the underside streaks are wider; the yellow of their bare parts is paler. Hatchlings are covered in white down feathers, changing to a buff-grey second down coat before they grow their first true plumage

Spotted at a rocky sea shore.