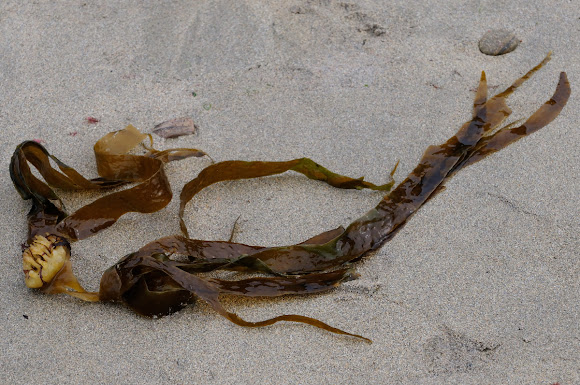 large and bulky seaweed growing to 2-2.5 metres long. The holdfast is a large, hollow, knobbly structure. The stipe is long, tough, leathery and rigid and is several centimetres wide. Near the base the margin forms several broad, wavy frills. These ruffles tend to dissipate wave energy and lessen the likelihood that it will be torn from the rock. The frond is digitate with about eight large flat lobes and may be massive. The lack of a midrib distinguishes it from Alaria esculenta. It is an extremely fast growing species, growing annually from the base and becoming fully extended over the course of a few months. S. polyschides is found on the lowest part of the shore. It can not tolerate desiccation and may be found in places where it is wetted by spray when uncovered by the retreating tide. It is often found in association with Laminaria hyperborea.

Stranded on the beach

Thanks Mark, sometimes I do not know where I left my brain