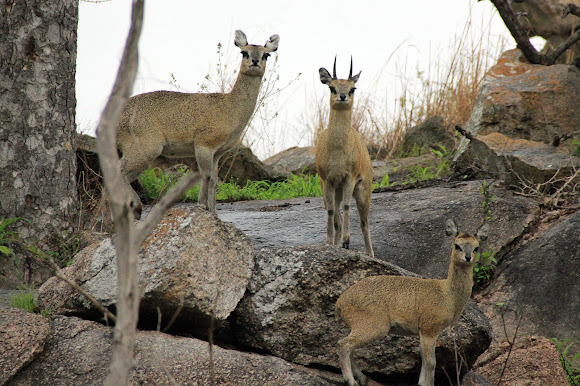 The name Klipspringer is the Afrikaans for ‘rock jumper' and alludes to the animal's ability in rocky territory where it can be seen moving freely, seemingly on tiptoe. Weighing 11-13 Kg and standing 500-600mm high at the shoulders, this is a small and stocky antelope. Ewes are slightly larger than the rams. Only rams have short horns, which are ringed only at the base. Klipspringer have smallish rounded ears positioned far back on the head, and with noticeable dark inner markings. The coarse-haired coat is variable in colour with shades of grey, yellow, brown or red, with marked white underparts, chin and lips. A prominent feature is the large, black pre-orbital gland. (http://www.krugerpark.co.za/africa_klips...)

Klipspringer have a restricted habitat preference, namely to very rocky environments of mountainous areas and koppies. This allows this nimble-footed antelope to escape from its predators. They are distributed in the following areas in Southern Africa, Zoutpansberg and Lebombo mountain ranges and foothills, along the Kuiseb River in the Namib Desert, lower Orange River, and common in the mountain areas of the Western Cape. Less common in the Drakensberg mountain range. (http://www.krugerpark.co.za/africa_klips...)