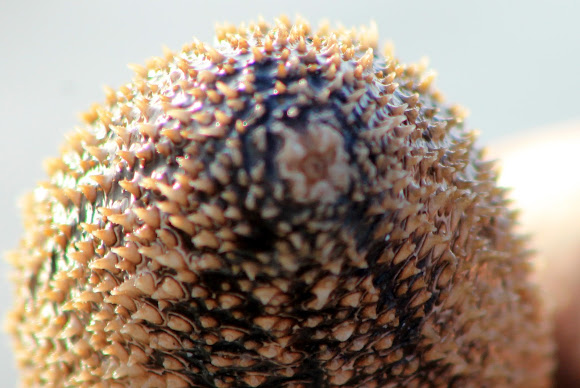 Like all echinoderms, sea cucumbers have an endoskeleton just below the skin, calcified structures that are usually reduced to isolated microscopic ossicles (or sclerietes) joined by connective tissue. In some species these can sometimes be enlarged to flattened plates, forming an armour. In pelagic species such as Pelagothuria natatrix (Order Elasipodida, family Pelagothuriidae), the skeleton and a calcareous ring are absent The body of a holothurian is roughly cylindrical. It is radially symmetrical along its longitudinal axis, and has weak bilateral symmetry transversely with a dorsal and a ventral surface. As in other Echinozoans, there are five ambulacra separated by five ambulacral grooves, the interambulacra. The ambulacral grooves bear four rows of tube feet but these are diminished in size or absent in some holothurians, especially on the dorsal surface. The two dorsal abulacra make up the bivium while the three ventral ones are known as the trivium.[13] At the anterior end, the mouth is surrounded by a ring of tentacles which are usually retractable into the mouth. These are modified tube feet and may be simple, branched or arborescent. They are known as the introvert and posterior to them there is an internal ring of large calcareous ossicles. Attached to this are five bands of muscle running internally longitudinally along the ambulacra. There are also circular muscles, contraction of which cause the animal to elongate and the introvert to extend. Anterior to the ossicles lie further muscles, contraction of which cause the introvert to retract.[13] The body wall consists of an epidermis and a dermis and contains smaller calcareous ossicles, the types of which are characteristics which help to identify different species. Inside the body wall is the coelom which is divided by three longitudinal mesenteries which surround and support the internal organs.[13]

Sea cucumbers are found on the sea floor worldwide.

remarkable feature of these animals is the catch collagen[Notes 1] that forms their body wall. This can be loosened and tightened at will, and if the animal wants to squeeze through a small gap, it can essentially liquefy its body and pour into the space. To keep itself safe in these crevices and cracks, the sea cucumber will hook up all its collagen fibres to make its body firm again.[2] A sea cucumber in Mahé, Seychelles ejects sticky filaments from the anus in self-defence Some species of coral-reef sea cucumbers within the order Aspidochirotida can defend themselves by expelling their sticky cuvierian tubules (enlargements of the respiratory tree that float freely in the coelom) to entangle potential predators. When startled, these cucumbers may expel some of them through a tear in the wall of the cloaca in an autotomic process known as evisceration. Replacement tubules grow back in one-and-a-half to five weeks, depending on the species.[3] The release of these tubules can also be accompanied by the discharge of a toxic chemical known as holothurin, which has similar properties to soap. This chemical can kill any animal in the vicinity and is one more way in which these sedentary animals can defend themselves.[2] They can be found in great numbers on the deep sea floor, where they often make up the majority of the animal biomass.[4] At depths deeper than 5.5 mi (8.8 km), sea cucumbers comprise 90% of the total mass of the macrofauna.[5] Sea cucumbers form large herds that move across the bathygraphic features of the ocean, hunting food. The body of some deep water holothurians, such as Enypniastes eximia, Peniagone leander and Paelopatides confundens,[6] is made of a tough gelatinous tissue with unique properties that makes the animals able to control their own buoyancy, making it possible for them to either live on the ocean floor or to actively swim [7] or float over it in order to move to new locations,[8] In more shallow waters, sea cucumbers can form dense populations. The strawberry sea cucumber (Squamocnus brevidentis) of New Zealand lives on rocky walls around the southern coast of the South Island where populations sometimes reach densities of 1,000 animals per square meter. For this reason, one such area in Fiordland is simply called the strawberry fields.[9] Emperor shrimp Periclimenes imperator on a Bohadschia argus sea cucumber A variety of fish, most commonly pearl fish, have evolved a commensalistic symbiotic relationship with sea cucumbers in which the pearl fish will live in sea cucumber's cloaca using it for protection from predation, a source of food (the nutrients passing in and out of the anus from the water), and to develop into their adult stage of life. Many polychaete worms and crabs have also specialized to use the cloacal respiratory trees for protection by living inside the sea cucumber.[10] The largest American species,Holothuria floridana, which abounds just below low-water mark on the Florida reefs, has volumes well over 500 cubic centimeters.[11] Visitors to the Mariana Islands often encounter the local variation, called balate, which litters the sea floor all around the island, including in water as shallow as 3 feet (91 cm). These jet black sea cucumbers are normally 10 to 12 inches (25 to 30 cm) long, 1.5 to 2.0 inches (3.8 to 5.1 cm) in diameter and are often curled up, partially covered with sand from the sea floor. The most common way to separate the subclasses is by looking at their oral tentacles. Subclass Dendrochirotacea has 8-30 oral tentacles, subclass Aspidochirotacea has 10-30 leaflike or shieldlike oral tentacles, while subclass Apodacea may have up to 25 simple or pinnate oral tentacles and is also characterized by reduced or absent tube feet, as in the order Apodida. Most sea cucumbers reproduce by releasing sperm and ova into the ocean water. Depending on conditions, one organism can produce thousands of gametes. Sea cucumbers are typically dioecious, with separate male and female individuals, but some species are protandric. The reproductive system consists of a single gonad, consisting of a cluster of tubules emptying into a single duct that opens on the upper surface of the animal, close to the tentacles.[12] At least 30 species, including the red-chested sea cucumber (Pseudocnella insolens), fertilise their eggs internally and then pick up the fertilised zygote with one of their feeding tentacles. The egg is then inserted into a pouch on the adult's body, where it develops and eventually hatches from the pouch as a juvenile sea cucumber.[20] A few species are known to brood their young inside the body cavity, giving birth through a small rupture in the body wall close to the anus.[12] In all other species, the egg develops into a free-swimming larva, typically after around three days of development. The first stage of larval development is known as an auricularia, and is only around 1 millimetre (0.039 in) in length. This larva swims by means of a long band of cilia wrapped around its body, and somewhat resembles the bipinnaria larva of starfish. As the larva grows it transforms into the doliolaria, with a barrel-shaped body and three to five separate rings of cilia. The tentacles are usually the first adult features to appear, before the regular tube feet