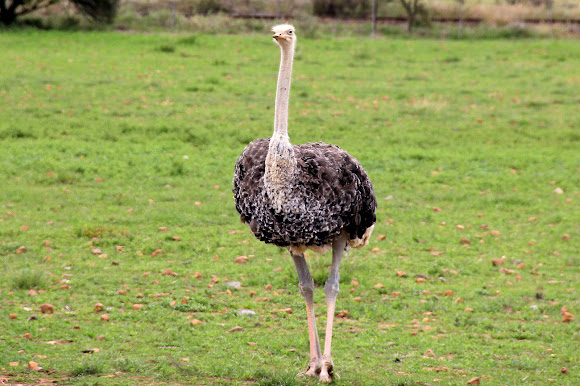 Ostriches usually weigh from 63 to 145 kilograms, or as much as two adult humans. Exceptional male ostriches (in the nominate subspecies) can weigh up to 156.8 kg. At sexual maturity (two to four years), male ostriches can be from 2.1 to 2.8 m in height, while female ostriches range from 1.7 to 2.0 m tall. New chicks are fawn in colour, with dark brown spots. During the first year of life, chicks grow at about 25 cm per month. At one year of age, ostriches weigh approximately 45 kilograms. Their lifespan is up to 40–45 years. (https://en.wikipedia.org/wiki/Ostrich)

Ostriches formerly occupied Africa north and south of the Sahara, East Africa, Africa south of the rain forest belt, and much of Asia Minor. Today ostriches prefer open land and are native to the savannas and Sahel of Africa, both north and south of the equatorial forest zone. In Southwest Africa they inhabit the semi-desert or true desert. They rarely go above 100 m (330 ft). Farmed ostriches in Australia have established feral populations. The Arabian ostriches in the Near and Middle East were hunted to extinction by the middle of the 20th century. Ostriches have occasionally been seen inhabiting islands on the Dahlak Archipelago, in the Red Sea near Eritrea. (https://en.wikipedia.org/wiki/Ostrich)