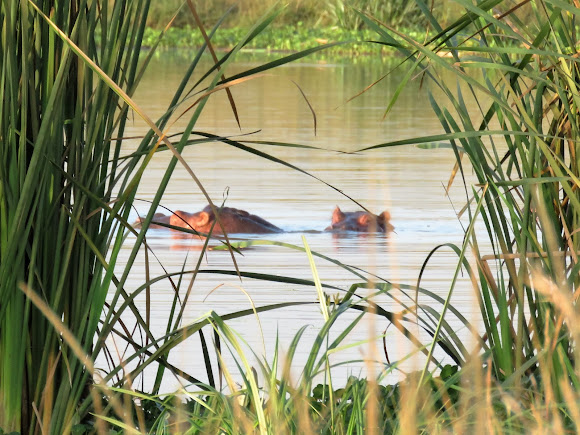 Common hippopotamus or hippo, is a large, mostly herbivorous mammal in sub-Saharan Africa, and one of only two extant species in family Hippopotamidae. Common hippos are easily distinguishable from other safari animals, thanks to their totally unique appearance. They are the world’s third largest type of land mammal with the average adult hippo weighing in at around 1,400 kilograms. Males are bigger than females, although at a young age they look much the same with bulky, hairless bodies and enormous mouths equipped with elongated tusks.

Observed on three different spots (ponds) in Nairobi National Park. On photos 2 to 4, a lone animal, probably bull (?) enjoying its time in water...

Contrary to their peaceful look, hippos are aggressive animals, and according to much of literature, hippo is responsible for more human fatalities in Africa than any other large animal. Male hippos actively defend their territories which run along the banks of rivers and lakes. Females have also been known to get extremely aggressive if they sense anyone coming in between their babies, who stay in the water while she feeds on the shore. Hippos can run at speeds of over 20 miles an hour and they have enormous jaws which host up to 20-inch canines, and can kill a crocodile.