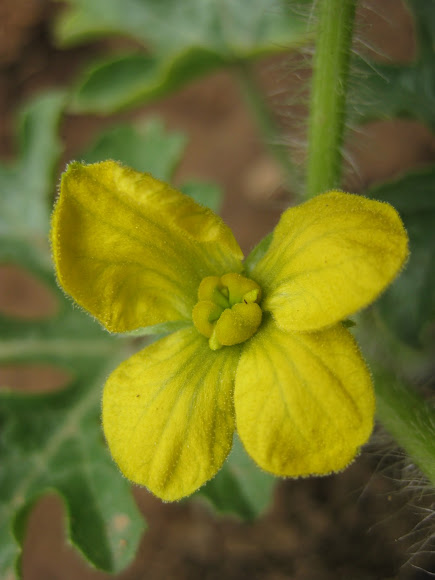 Watermelon (Citrullus lanatus (Thunb.), family Cucurbitaceae) is a vine-like (scrambler and trailer) flowering plant originally from southern Africa. Its fruit, which is also called watermelon, is a special kind referred to by botanists as a pepo, a berry which has a thick rind (exocarp) and fleshy center (mesocarp and endocarp). Pepos are derived from an inferior ovary, and are characteristic of the Cucurbitaceae. The watermelon fruit, loosely considered a type of melon – although not in the genus Cucumis – has a smooth exterior rind (green, yellow and sometimes white) and a juicy, sweet interior flesh (usually deep red to pink, but sometimes orange, yellow and even green if not ripe). It is also commonly used to make a variety of salads, most notably fruit salad.

I decided to grow a few watermelon plants in my orchard