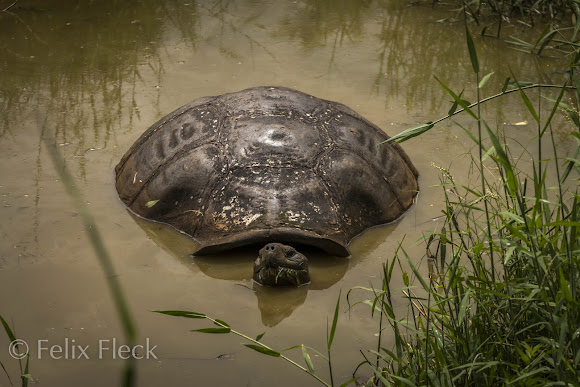 This giant was taking a cooling bath on a hot balmy day. C. porteri is an endemic species to the island of Santa Cruz, which can be linked to the Floreana and southern Isabela tortoises. In 2015, the Santa Cruz population was found to contain a distinct taxon, closer to the Chatham Island tortoise. The shape of its carapace is oval and domed, being higher in the centre than the front. It can reach lengths of about 130cm (pictured specimen measured around 115cm).

Green and densely vegetated interior of the island, on one of the local farms, where tortoises roam freely with plenty of food.

Breeding programs are steady and over 3,000 individuals populate the island. However, the species is considered endangered. http://www.iucnredlist.org/details/9026/...