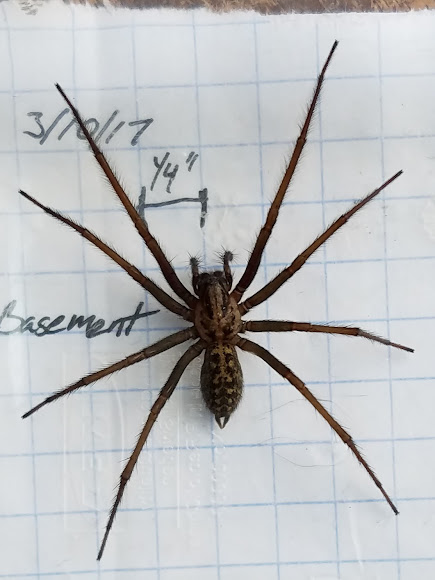 One of the larger spiders encountered in and around structures in the Puget Sound area. I grew up mistakenly calling these Wolf spiders. Then I got a little older and mistakenly called them Hobo spiders. Giant House Spider seems to be the international common name frequently associated with this species. Current North American distribution on wikipedia.org is interesting, showing just two isolated pockets, one in the northwest and another on the east coast.

I have a few of these downstairs. The female collected dirt and small debris from the bottom of the container, made bigger hard clumps and attached them to her egg sac. This later prevented the sac from being crushed when I set the wood lid on the table. I am waiting for them to hatch. ....the female escaped when l failed to completely cover the glass box container with the lid.

Check out the you tube video for a cool shot of the palps and chelicera. https://youtu.be/8CB2VK7knSM

Hello Bug A and Welcome to the Project Noah community!
We hope you like the website as much as we do. There are many aspects to the site and community. The best way to get started is to read the FAQs at http://www.projectnoah.org/faq where you can find all the tips, advice and "rules" of Project Noah. You, like the rest of the community, will be able to suggest IDs for species that you know (but that have not been identified), and make useful or encouraging comments on other users' spottings (and they on yours).
There are also "missions" you can join and add spottings to. See http://www.projectnoah.org/missions . A mission you should join is the http://www.projectnoah.org/missions/2166... to chose the best wild photo of 2017,only the spottings added to that mission are eligible.Note that most missions are "local". Be sure not to add a spotting to a mission that was outside of mission boundaries or theme :) Each mission has a map you may consult showing its range. We also maintain a blog archive http://blog.projectnoah.org/ where we have posted previous articles from specialists from different geographical areas and categories of spottings, as well as wildlife "adventures".
So enjoy yourself, share, communicate, learn. See you around :)

Spotted by
Bug A