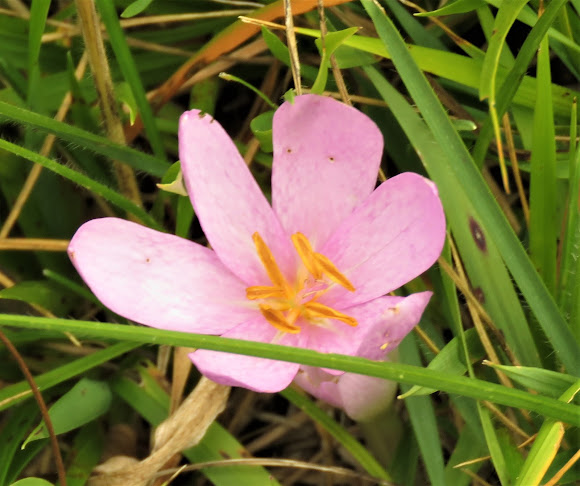 Dangerous resemblance: this late flowering plant is Autumn Crocus, also known as Meadow saffron and Naked ladies, belonging to Colchicaceae family. It resembles crocuses, but in reality the two plants are not related at all. The autumn crocus develops its flowers alone, after the vegetative organs have already died - there are no leaves visible around flowers. At this stage, flowers are 5 to 15 cm tall, sporting six rose tepals, six stamens with orange anthers and three white styles. Flower develops on a tubelike stem, and the ovary is underground - it will develop into a seed that will hibernate. Leaves are produced in spring and they vaguely resemble those of Bear's garlic a.k.a Ramson, which are prized as an edible plant, and entering the preparation of pestos, salads and sauces...

Seen in a meadow, on slopes of Jura Range, where it descends to valley of Geneva lake; in Jura Regional Wildlife Park and on edges of Jura Reserve. Meadow & pasture is surrounded by mainly coniferous forest (spruce and fir), and on some 900 m of altitude.

One more poisonous flower in my collection (no, I'm not doing it on purpose...), and this one apparently deadly. It contains several alkaloids, and among them, the colchicine, the most dangerous and deadly one. However, in spite of its toxicity, it is used in genetics - it prevents the cell division but not the chromosome division and thus creates polyploids, or organisms with doubled (or more) number of chromosomes. Moreover, the colchicine is also used in gout treatment, as well in some other fever linked diseases.