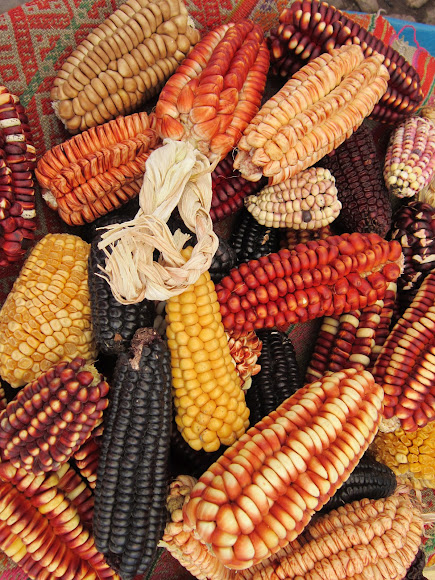 Maize ( /ˈmeɪz/ mayz; Zea mays L, from Spanish: maíz after Taíno mahiz) known in many English-speaking countries as corn or mielie/mealie, is a grain domesticated by indigenous peoples in Mesoamerica in prehistoric times. The leafy stalk produces ears which contain seeds called kernels. Though technically a grain, maize kernels are used in cooking as a vegetable or starch. The Olmec and Mayans cultivated it in numerous varieties throughout central and southern Mexico, cooked, ground or processed through nixtamalization. Exotic varieties of maize are collected to add genetic diversity when selectively breeding new domestic strains.

Because of its shallow roots, maize is susceptible to droughts, intolerant of nutrient-deficient soils, and prone to be uprooted by severe winds.

either corn or maize

thanks Marsya and Gerardo for your kind comments

Satyen, thanks. I found a link on Wikipedia where they are called variegated maize. Somehow I think of sweet corn when I think of corn, maize seems to suit this tougher type of corn better.

That raises my appetite :Q

I guess you can call it Multi-coloured corn. Have a look here: http://en.wikipedia.org/wiki/File:Multi-...

Satyen, so which to I call it, corn or maize?

Hi Pamsai!
Corn and maize is the same.