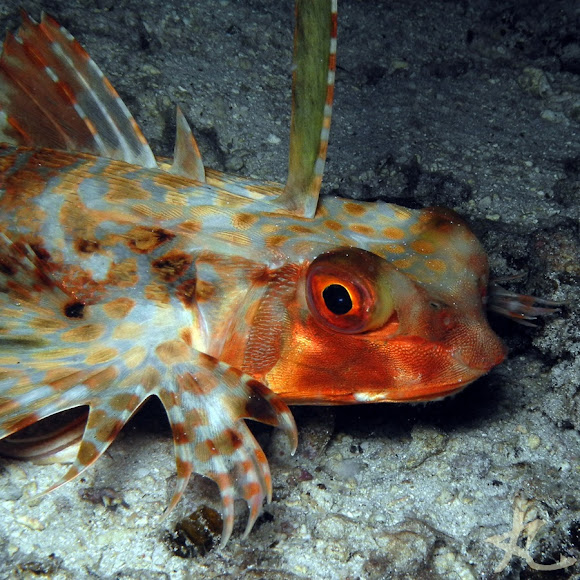 Also known as Purple Flying Gurnard, Oriental Helmut Gurnard, Brown Flying Gurnard, Oriental Searobin. They feed on small fish, bivalves and crustaceans, and grow to a length of about 38cm. The Flying Gurnard has huge, round pectoral fins. The fins are usually held collapsed against the body, but when threatened they can expand their "wings" to scare off predators. The pelvic fins act like legs as the fish walks along the bottom of the ocean, or when the fish is scouring the substrate for prey. They also grunt, which is how it got its name ("gurnard" is derived from the French for 'grunt').

Found singly on shallow sandy bottoms near deep water, at depths of 6 to 100m. Widespread in the Indo-Pacific region.

This is the largest flying gurnard I've ever seen -- over a foot long! Spotted it during a night dive at Isla Reta Beach Resort, Talikud Island.

Too bad, though, I didn't get a picture of this when it had its "wings" spread out fully. Maybe next time...

The Water World is another World!