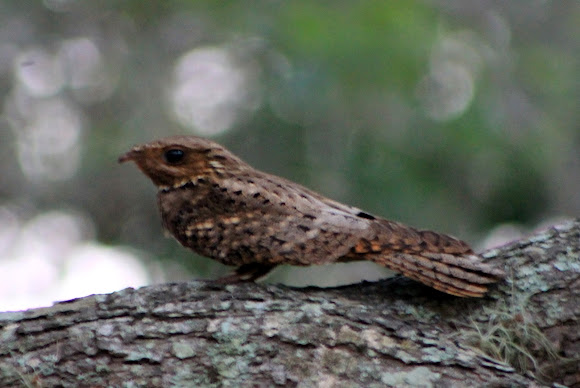 Nightjars are medium-sized nocturnal or crepuscular birds with long wings, short legs and very short bills. They are sometimes referred to as goatsuckers from the mistaken belief that they suck milk from goats (the Latin for goatsucker is Caprimulgus). Some New World species are named as nighthawks. Nightjars usually nest on the ground. Nightjars are found around the world. They are mostly active in the late evening and early morning or at night, and feed predominantly on moths and other large flying insects. Most have small feet, of little use for walking, and long pointed wings. Their soft plumage is cryptically coloured to resemble bark or leaves. Some species, unusual for birds, perch along a branch, rather than across it. This helps to conceal them during the day. Bracken is their preferred habitat. The Common Poorwill, Phalaenoptilus nuttallii is unique as a bird that undergoes a form of hibernation, becoming torpid and with a much reduced body temperature for weeks or months, although other nightjars can enter a state of torpor for shorter periods.[1] Nightjars lay one or two patterned eggs directly onto bare ground. It has been suggested that nightjars will move their eggs and chicks from the nesting site in the event of danger by carrying them in their mouths. This suggestion has been repeated many times in ornithology books, but while this may accidentally happen, surveys of nightjar research have found very little evidence to support this idea.[2][3]

Thanks this was a lucky find