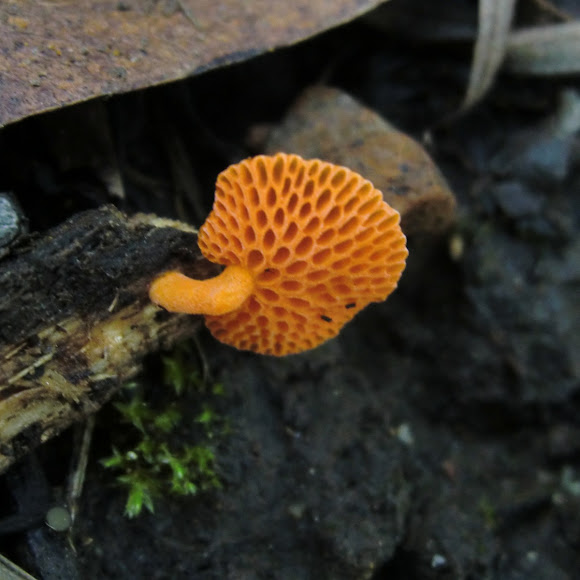 A bright orange plate-like fungus about 12mm wide. The upper side was uneven with a tessellated pattern over the entire surface. On the lower side, corresponding to the tessellation were deep pores, giving the underside an attractive spongy appearance. an eccentric orange coloured stipe attached the fruiting body to a decaying piece of wood

This solitary fungus was spotted arising from a small chip of decaying wood in a damp hollow which was covered with smashed rotting logs, possibly black wattle.

I was very happy to take my part-time photographer ( argybee) with me. He offered to take these photos for me as mine I was sure, were disappointing !. My thanks to argybee. This is an exciting find for me as I've always admired this beautiful fungus which was first seen in Australia in 2005 !. unfortunately it is invasive and in New Zealand, there is concern that it might take over and displace native species. It is also called orange poreconch fungus

Thanks Alice and Maria. I know others have put-up pictures of this attractive fungus on PN but finding your own is like magic !!- did not know what I was looking at until I turned it over.

Lovely job, both of you! A stricking fungus