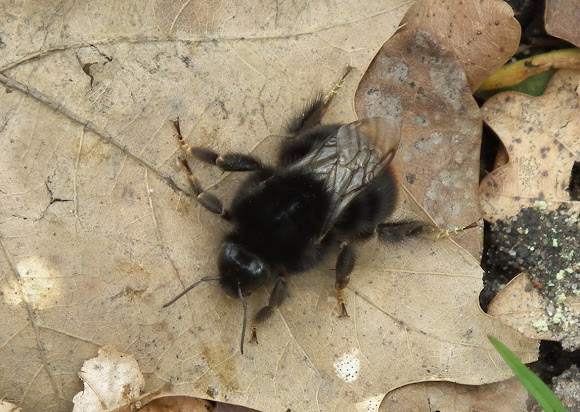 One of the "6 common bumblebees" of the UK (there are more than 6 spp of bumblebee here, but the others are much rarer). The red-tailed bumblebee lives underground in colonies ranging from sub-100 bees to over 200. I watched this one feed at this cluster of Spanish bluebells for a bit, then she landed on the leaf litter and looked to be brushing pollen off her legs. This bee species is very similar to the red-shanked carder bee, Bombus ruderarius, but distinguished by having black pollen baskets (instead of orange) and lacking a "hook" on the hind legs.

Widespread, needs flowers that can support it as it has quite a short tongue for a bee. Commonly found around walls and dried up dykes, as it is easy to burrow under these.

I watched her feed at these bluebells for a while. Guess she got covered in pollen because afterwards she spent a long time scraping it away... must be a nuisance to bees! Spotted on the University of Essex campus grounds.

How exciting, isn't she beautiful! Thank you for adding your spotting LauraMaria. Please keep them coming, it's fascinating building the collection.

Wow it is great! I had never before seen a black Bumblebee! Beware of attack of these little hairy at the University hihihi Superb serie-photos ! i add to my favorites :))