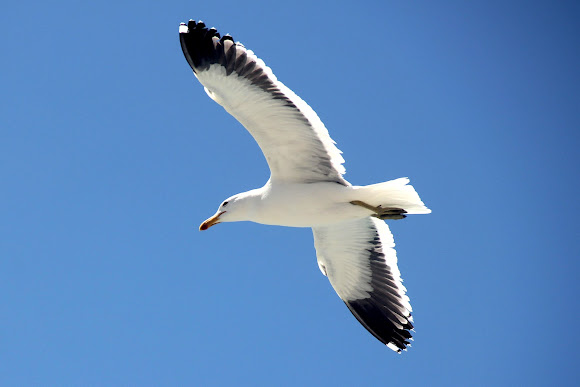 The kelp gull superficially resembles two gulls from further north in the Atlantic Ocean the lesser black-backed gull and the great black-backed gull. The kelp is intermediate in size between these two species. This species ranges from 54 to 65 cm in total length, from 128 to 142 cm in wingspan and from 540 to 1,390 g in weight. Adult males and females weigh on average 1,000 g and 900 g respectively. Among standard measurements, the wing chord is 37.3 to 44.8 cm , the bill is 4.4 to 5.9 cm and the tarsus is 5.3 to 7.5 cm . The adult kelp gull has black upper parts and wings. The head, underparts, tail and the small "mirrors" at the wing tips are white. The bill is yellow with a red spot, and the legs are greenish-yellow (brighter and yellower when breeding, duller and greener when not breeding). The call is a strident ki-och. Juveniles have dull legs, a black bill, a dark band in the tail, and an overall grey-brown plumage densely edged whitish, but they rapidly get a pale base to the bill and largely white head and underparts. They take three or four years to reach maturity. (https://en.wikipedia.org/wiki/Kelp_gull)