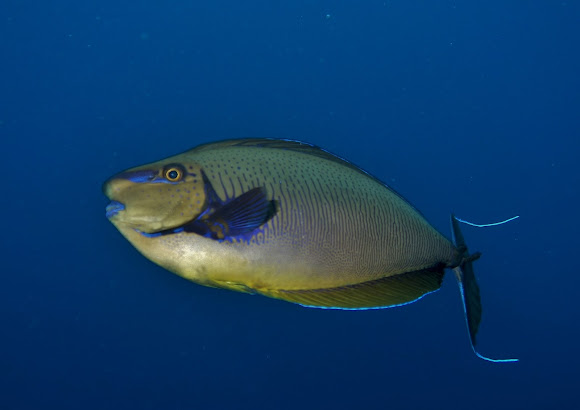 Naso vlamingii is a species of unicornfish in the surgeonfish family known by the common names bignose unicornfish, scibbled unicornfish, Vlaming's unicornfish, and zebra unicornfish. This is a relatively large member of the Acanthuridae, easily reaching 60 centimeters. The adult has tall dorsal and anal fins, vertical blue lines on its sides, and small blue spots dorsally and ventrally. A broad blue band extends from the eyes to the prominent snout. The coloration of the juvenile is a dingy green with blue spots and lips, later turning deeper blue with purple markings. The fish turns mud-brown while sleeping or when frightened, a form of camouflage.

Off coral reefs from Indo-Pacific oceans off the coasts of East Africa, on the islands of the Marquesas and Tuamotu, southern Japan and southern areas of the Great Barrier Reef. It is most often found in association with reefs and coastal lagoons, sometimes in small schools.

They loves the bubbles of divers and tend to follow above the head of divers waiting for divers to exhale and as the bubbles rises, they 'play' with it swimming upward together with the bubbles.