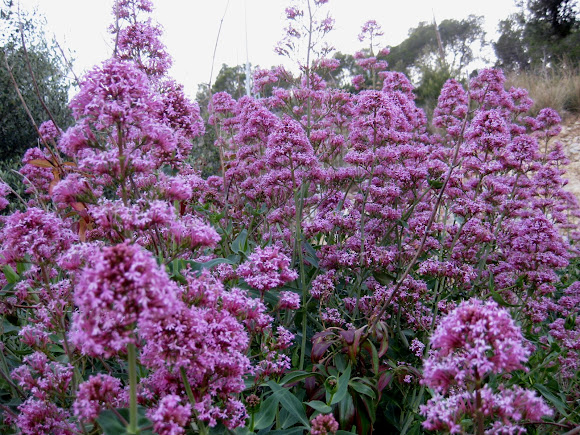 It grows as a perennial plant, usually as a subshrub though it can take any form from a herb to a shrub depending on conditions; the plants are usually woody at the base. The leaves are generally 5-8 cm in length. Their shape changes from the bottom to the top of the plant, the lower leaves being petioled while the upper leaves are sessile. The plant flowers profusely, and though the individual flowers are small (no more than 2 cm), the inflorescences are large and showy. The flowers have a strong and somewhat rank scent: they are pollinated by both bees and butterflies and the plant is noted for attracting insects. It is used as a food plant by the larvae of some Lepidoptera species including Angle Shades. The flowers are usually a purplish red, but sometimes lavender or white in colour.

A native of the Mediterranean region, Centranthus ruber has been introduced into many other parts of the world as a garden escapee. It is naturalised in Australia, Great Britain and the United States. In the US it can be found growing wild in such western states as Arizona, Utah, California, Hawaii, and Oregon, usually in disturbed, rocky places at elevations below 200 m. It is often seen by roadsides or in urban wasteland. It can tolerate very alkaline soil conditions, and will grow freely in old walls despite the lime in their mortar.