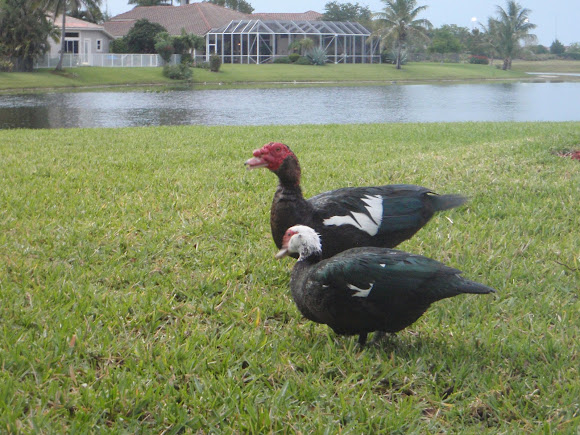 The Muscovy Duck (Cairina moschata) is a large duck native to Mexico, Central, and South America. Small wild and feral breeding populations have established themselves in the United States, particularly in the lower Rio Grande Valley of Texas, as well as in many other parts of North America, including southern Canada. Feral Muscovy Ducks have also been reported in parts of Europe. They are a large duck, with the males measuring about 76 cm in length, and weighing up to 15 pounds. Females are considerably smaller, and only grow to 7 pounds, roughly half the males' size. The bird is predominantly black and white, with the back feathers being iridescent and glossy in males, while the females are more drab. The amount of white on the neck and head is variable, as well as the bill, which can be yellow, pink, black, or any mixture of these. They may have white patches or bars on the wings, which become more noticeable during flight. Both sexes have pink or red wattles around the bill, those of the male being larger and more brightly colored.

The male likes my cat.