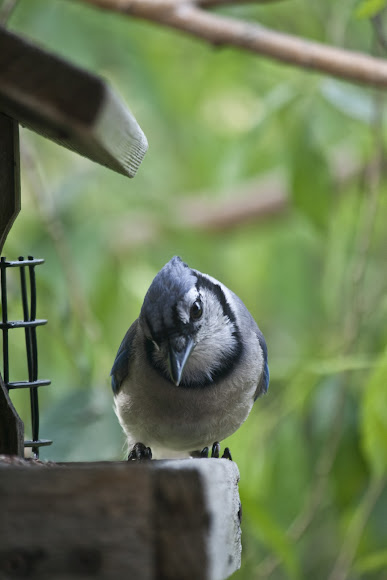 The Blue Jay measures 22–30 cm (9–12 in) from bill to tail and weighs 70–100 g (2.5–3.5 oz), with a wingspan of 34–43 cm (13–17 in).[3] There is a pronounced crest on the head, a crown of feathers, which may be raised or lowered according to the bird's mood. When excited or aggressive, the crest may be fully raised. When frightened, the crest bristles outwards, brushlike. When the bird is feeding among other jays or resting, the crest is flattened to the head.[4] Its plumage is lavender-blue to mid-blue in the crest, back, wings, and tail, and its face is white. The underside is off-white and the neck is collared with black which extends to the sides of the head. The wing primaries and tail are strongly barred with black, sky-blue and white. The bill, legs, and eyes are all black. Males and females are nearly identical.[5] As with other blue-hued birds, the Blue Jay's coloration is not derived from pigments but is the result of light interference due to the internal structure of the feathers;[citation needed] if a blue feather is crushed, the blue disappears as the structure is destroyed.[6] This is referred to as structural coloration. Blue Jays have strong black bills used for cracking nuts and acorns, and for eating corn, grains and seeds, although they also eat insects such as beetles, grasshoppers, and caterpillars. Wiki: http://en.wikipedia.org/wiki/Blue_Jay

The Blue Jay occurs from southern Canada through the eastern and central USA south to Florida and northeastern Texas. The western edge of the range stops where the arid pine forest and scrub habitat of the closely related Steller's jay (C. stelleri) begins. Recently, the range of the Blue Jay has extended northwestwards so that it is now a rare but regularly seen winter visitor along the northern US and southern Canadian Pacific Coast,[7] As the two species' ranges now overlap, C. cristata may sometimes hybridize with Steller's jay.[8] The northernmost subspecies C. c. bromia is migratory, subject to necessity. It may withdraw several hundred kilometers south in the northernmost parts of its range, but even northern birds do not necessarily move south, particularly in mild years with plentiful winter food. It migrates during the daytime, in loose flocks of 5 to 250 birds. The Blue Jay occupies a variety of habitats within its large range, from the pine woods of Florida to the spruce-fir forests of northern Ontario. It is less abundant in denser forests, preferring mixed woodlands with oaks and beeches.[4] It has expertly adapted to human activity, occurring in parks and residential areas, and can adapt to wholesale deforestation with relative ease if human activity creates other means for the jays to get by.[9] Wiki: http://en.wikipedia.org/wiki/Blue_Jay

This Blue Jay and several others are nesting on my property, and are frequent visitors to the feeders. They are a riot to have around as they are super active year round, and remind us during the coldest winter months that not all of the earth has gone to sleep. :-D The first two pictures show the Jay trying to figure me out. They are very inquisitive little birds. The third picture is posted to show the striking colors of the Jay, and where they get their name.

Love the second shot. Such a beauty!

Thank you for the compliment Suman! I really love these little birds. They are so entertaining to watch at the feeders.