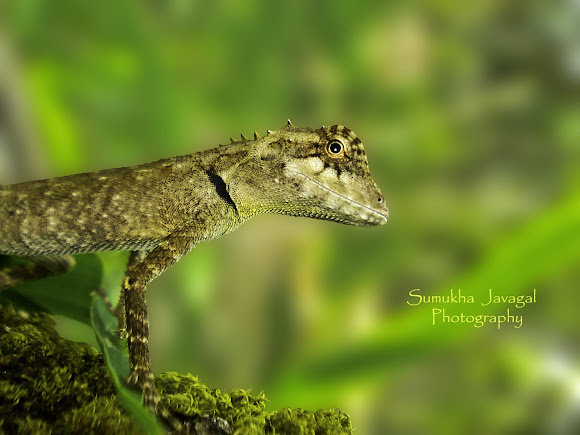 Roux's Forest Calotes or Roux's Forest Lizard (Calotes rouxii) is an agamid lizard found in the Western Ghats of India. Two small groups of spines, separated from each other, on each side of the neck. A fold in front of the shoulder. Tail compressed into a sharpish edge at its base, covered superiorly with very large pentagonal scales. Scales on the sides of the body nearly as large as those on the belly. Tail below with four longitudinal series of rhomboid, strongly keeled scales, each terminating in a point posteriorly. Brownish, uniform or spotted with black.

Thank you very much for the correct ID Gopal..:-) I will update it now..

Calotes versicolor now has 3 votes for your spotting. According to the FAQs of the Project Noah website "Spottings are defined as identified when they have a scientific name entered in the scientific name field, a reference link added or a species suggestion with at least 3 votes [and no competing suggestions with 3 votes]." So unless you have good reason to doubt the suggestion, it would make sense for you to add the scientific name to the space reserved for it. Thanks!

You are right dandoucette.. It was pretty small when compared to others..:-) Thanks for the ID..

Thank u very much Anne Marie McCaffrey and KatCuff..:-)