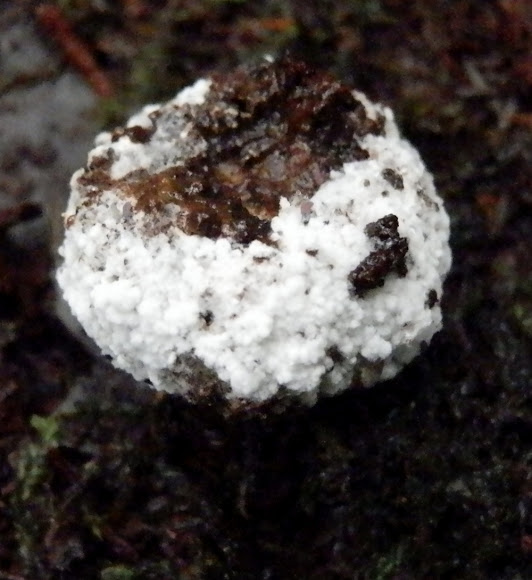 Small 15mm sized irregular shaped balls hanging from the side of a dead log. There were two of these and perhaps a third one (pics #3 & 4) on the same log. Each ball-like structure had a white powdery lobulated outer layer. It was extremely soft and velvety to touch. Some of the covering layer broke away to reveal a gelatinous dark brown mass ( pic #2) with squashed lenticular structures embedded in the gelatinous mass. The second mass appeared to have hyphae at the base which was slightly yellow.

Spotted in a damp eucalyptus forest on a dead log which was lying across a deep hollow.

The hollow was covered with leech infested grass so, I could not get better shots of these fungi.
This is the sporangial (aethalial) phase of the slime mold-the brown spores can be seen within the soft white fruiting body.
Alder (Alnus glutinosa) is said to be the common host however, there are reports from outside Australia that it is seen in association with Eucalyptus
http://data.rbg.vic.gov.au/cat/fungicata...
Alder trees have been introduced into Australia.

It's all yours then :P

..doesn't do much for the appetite?! - looks like brown lentils and yoghurt to me !!

Interesting find. Haven't heard of this before. Doesn't do much for the appetite. :)