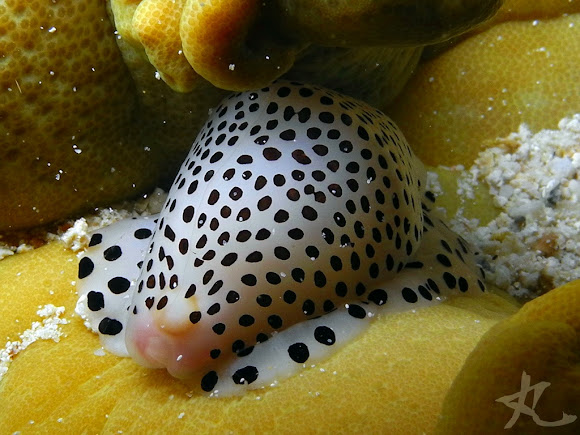 This cowry is also known as Umbilical Egg Shell and Warty Egg Cowry. Its shell is completely white and can grow as long as 40mm. The anterior and posterior extremities have a slight purple coloration, with a yellow circle at the edge of a depressed pustule. Its mantle and foot are white and covered in brown spots.

During the day, this cowry can be found under soft coral or sponges. This species is mainly distributed in the tropical South East Africa and in the Western Pacific Ocean, in the waters along Madagascar, Mascarene Islands, Red Sea, Indonesia, Thailand and the Philippines.

Spotted this very attractive cowry feeding on a mushroom leather coral during a night dive; it was at a depth of less than 15m. It measured about 2cm long.

Thanks, ArgyBee! Yeah, it was a pleasant surprise seeing it on that night dive.

Thanks very much for the ID, Jolly! Very helpful! :)

It's rather difficult trying to identify cowries, isn't it..? Anyone know of an online resource for such?