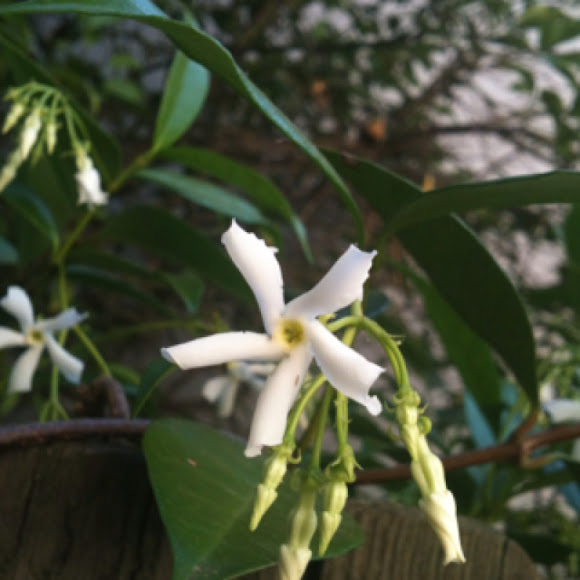 Star jasmine is a deep green evergreen vine that will climb to fifteen feet (& potentially thirty or forty feet) self-clinging on a sunny wall. It can be kept within a given size by periodic pruning. It will not harm masonry but vines can find their way under shingles. It flowers mainly in spring & early summer, beginning as early as April & not slowing down until July. A few more flowers will occur to the very end of summer. It's a good vine to place near doorway or a much-used path in order to most appreciate its fragrance. The leaves are used to brew tonic teas & herbal remedies in China, believed to be useful for problems of old age such as arthritis & heart disease. Research done in Australia indicate that this plant really does contain chemical enzymes that function as anti-inflammatories.

Native to central and north China. It should be fully hardy in a sunny location in Zone 8. In Zones 9 & 10 it may want a bit of afternoon shade to protect it from scald. Also in Zone 9 or 10 it can be used as a groundcover or on a slope, but in Zone 8 the ground may expose its leaves to too much frost. Because of its popularity in the South it is often called Confederate Jasmine, without regard for the fact that it is actually from China, but many people dislike that common name because of the slavery connotations of the Confederacy & the use of the Confederate flag by racists. For most of the country, it is called Star Jasmine.

Jasmine has been used by the Chinese to "scent" tea since as early as 300AD if not earlier. This tea has always been though as an aromatic tea and the flowers would be placed along side drying or dried green tea so that the tea would absorb some of the essence of the jasmine flowers. The process in current day is a bit different as the Jasmine flowers are simply mixed in with the tea.