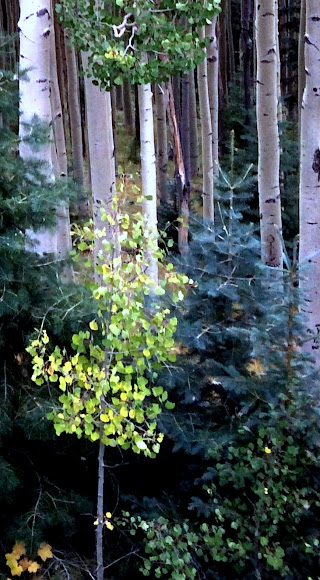 Populus tremuloides is a deciduous tree native to cooler areas of North America, one of several species referred to by the common name aspen. It is commonly called quaking aspen, trembling aspen, American aspen, Quakies, mountain or golden aspen, trembling poplar, white poplar, popple, and even more names. The trees have tall trunks, up to 25 meters (82 feet) tall, with smooth pale bark, scarred with black. The glossy green leaves, dull beneath, become golden to yellow, rarely red, in autumn. The species often propagates through its roots to form large groves originating from a shared system of rhizomes.

Quaking aspen occurs across Canada in all provinces and territories, with the possible exception of Nunavut. In the United States, it can be found as far north as the northern foothills of the Brooks Range in Alaska, where road margins and gravel pads provide islands of well-drained habitat in a region where soils are often waterlogged due to underlying permafrost. It occurs at low elevations as far south as northern Nebraska and central Indiana. In the western United States, this tree rarely survives at elevations lower than 1,500 feet (460 m) due to hot summers experienced below that elevation, and is generally found at 5,000–12,000 feet (1,500–3,700 m). It grows at high altitudes as far south as Guanajuato, Mexico.