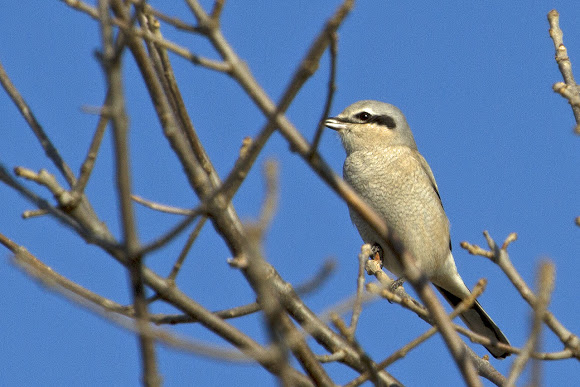 Cool Facts The Northern Shrike, like other shrikes, kills more prey, if it can, than it can immediately eat or feed to nestlings. Such behavior was characterized by early observers as "wanton killing," but the Northern Shrike stores excess prey to eat later. Storing food is an adaptation for surviving periods of food scarcity. The Latin species name of the Northern Shrike, Lanius excubitor, means "Butcher watchman." The nest of the Northern Shrike is an open cup, but it is so deep that while incubating, the female is completely out of view except for the tip of her tail. Both male and female Northern Shrikes sing throughout year. The male sings especially in late winter and early spring.

Northern Shrike are rare for Ohio.