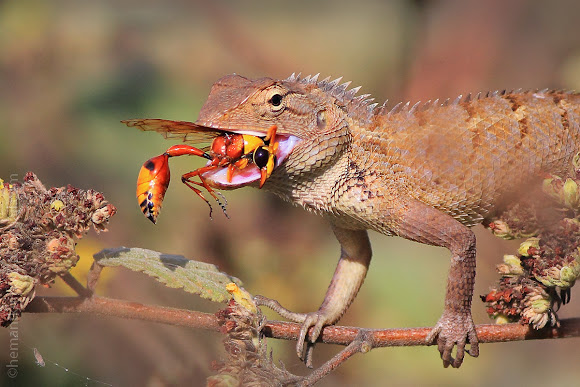 It measures over 10 cm (3.9 in) in length snout-to-vent. Total length including the tail is up to 37 cm (14.5 in). Two small groups of spines, perfectly separated from each other, above each tympanum. Dorsal crest moderately elevated on the neck and anterior part of the trunk, extending on to the root of the tail in large individuals, and gradually disappearing on the middle of the trunk in younger ones. No fold in front of the shoulder, but the scales behind the lower jaw are much smaller than the others; gular sac not developed. From thirty-nine to forty-three series of scales round the middle of the trunk. The hind foot (measured from the heel to the extremity of the fourth toe) is not much longer than the head in the adult, whilst it is considerably longer in the young. The coloration is very variable, sometimes uniform brownish or greyish-olive or yellowish. Generally broad brown bands across the back, interrupted by a yellowish lateral band. Black streaks radiate from the eye, and some of them are continued over the throat, running obliquely backwards, belly frequently with greyish longitudinal stripes, one along the median line being the most distinct; young and half-grown specimens have a dark, black-edged band across the inter-orbital region.(wikipedia)

last three photographs are shot during breeding season. They discourage intruding males by brightening their red heads and doing "push-ups". Each tries to attract a female by inflating his throat and drawing attention to his handsomely coloured head. (wiki)

thank you so much friends

Congrats Hemant on your SOTD

sarah in the woods 7 years ago

Beautiful! Love the colors of the wasp. Congrats on SOTD.

wow , amazing photo, i must ask what type of camera were you using, im new to the whole photography world, i use a nikon l320

Congrat Hemant! I like everything in this amazing photo.

wow awesome thank you so much Yaseer n project Noah :)

Hemant, this super shot has earned you another well-deserved Spotting of the Day! Congratulations! What great timing and what a moment. Thanks for all your awesome contributions.

That is a beautiful wasp.