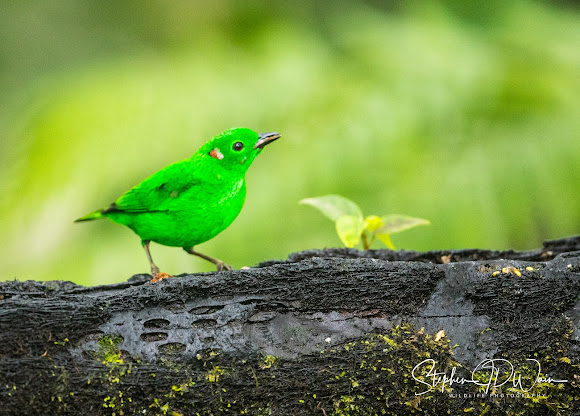 Named after its outward appearance, which is almost entirely a glistening emerald. The distinctive patch on the ear-coverts are accompanied by a blue grey patch. The patch appears drabe to humans, but is known to strongly reflect UV light. A similar UV-colored patch is found on the lesser wing coverts and shoulders. Though glistening green, these thin-billed and strong-legged tanagers tend to blend into foliage, and move so quickly through vegetation that protracted observation is difficult. Typically, single birds, pairs, or small family groups join mixed-species flocks where they feed primarily on insects, but they are also known to regularly join feeding aggregations at fruiting trees.

How green is that ! Congratulations.

Congratulations drstephen, you Glistening-green Tanager is our Spotting of the Day:

"This striking and aptly named Glistening-green Tanager (Chlorochrysa phoenicotis) is our Spotting of the Day! Tanagers (family Thraupidae) are passerines found in the New World, and mostly restricted to the tropics. The Glistening-green Tanager is almost entirely emerald green. One notable exception, well visible in this image, is a red patch on its ear-coverts, sided by a blue grey patch. The grey patch reflects light in the UV spectrum, which can be perceived by birds.
For more information: https://buff.ly/2s0QZLk "