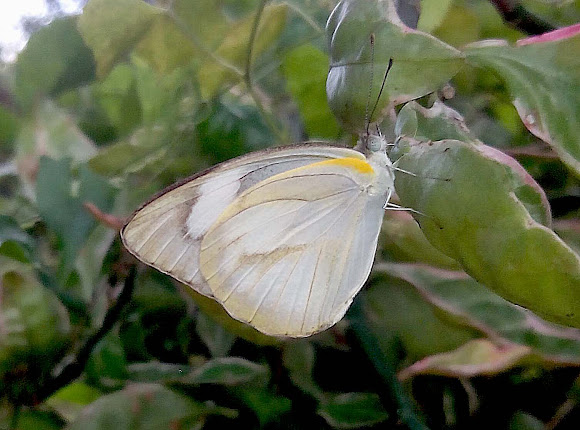 Pieridae; Pierinae; Appias olferna peducaea Fruhstorfer 1910. By comparing my pictures with those in Philippine Lepidoptera, I believe that this is a female with pale ventral dry season colouring. The Pierinae is described as follows: "Group of butterflies in the family Pieridae (order Lepidoptera) that are named for their white wings with black marginal markings. The adult butterflies have a wingspan of 37 to 63 mm (1.5 to 2.5 inches). Sexual seasonal dimorphism in pattern and colour occur in many species." https://philippinelepidopt.wixsite.com/b...

I spotted this Striped Albatross resting on foliage growing on and intertwining with a cyclone wire fence along the roadside 250 metres from our house. It was late afternoon (around 5:15 p.m. and because we had some unseasonal rain and it was very cloudy, it was becoming dark earlier than usual. So this butterfly was probably trying to settle down for the night. When I took the first picture, it moved a little to another position and the same again when I took a second shot. I did not want to disturb it any more and settled for what you see above.

There is a picture of a Dry Season Form (with pale colouring just like my pictures) on: https://eol.org/pages/54285725