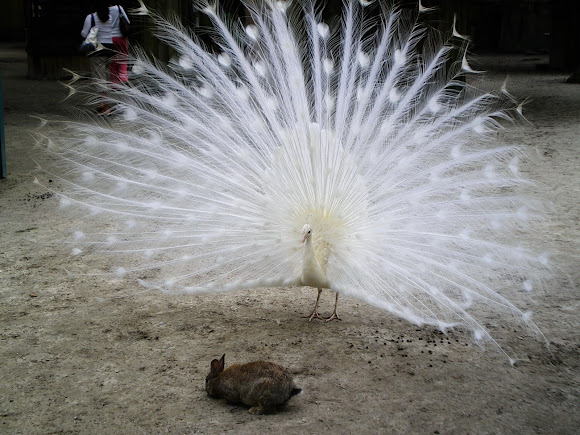 White peacocks are not albinos; they have a genetic mutation that is known as Leucism, which causes the lack of pigments in the plumage. Albino animals and birds have a complete lack of color and red or pink eyes while White peafowl have blue eyes. Chicks are born yellow and become white as they mature, according to the Peafowl Varieties Database. Indian peafowl of all colors, including white, have pink skin. The male is called a peacock, the female a peahen, and the offspring peachicks. This white peacock is a male. White peacocks are the same as the Indian Blue in size and behavior, but are white.

This white peacock lives in captivity and was spotted at a plantation in South Carolina. It displayed it's plumage because of the rabbit in front of it.

you are most welcome...

Thank you so much pamsai. I web searched white peacock ==I should have searched for white peafowl. Sorry for the inconvenience and thanks so much for catching my error.

checking out the scientific name of the white peacock for one of my spottings, Anartia jatrophae is the name of the White peacock butterfly! Waiting for confirmation....
http://www.projectnoah.org/spottings/168...

Wow! It is albino