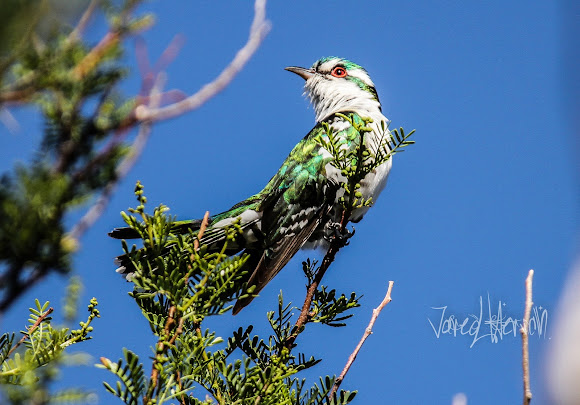 The diederik cuckoo is a smallish cuckoo at 18 to 20 cm. Adult males are glossy green above with copper-sheened areas on the back and whitish underparts. They have a broken white eye-stripe and a short, green malar stripe. All remiges have three to four white spots on the inner vanes. The four green outer tail feathers are tipped white, and the outermost pair are spotted white on both vanes. Females show more copper above, and have coppery barring on the flanks. The underparts are often washed brownish. Juveniles have a red bill, streaky throat and a white wing-bar. They are more copper-coloured above and browner below than the females, and the flank markings are brown blotches.

It is a common resident breeder in sub-Saharan Africa which has been recorded as far north as Cyprus (1982). It is a short-distance seasonal migrant, moving with the rains. It is a solitary bird, found in open woodland, savanna and riverside bushes

The diederik cuckoo is a brood parasite. It lays a single egg mostly in the nests of weavers, especially the village weaver and the bishops in the genus Euplectes. For example, it has been recorded in red-collared widowbirds.