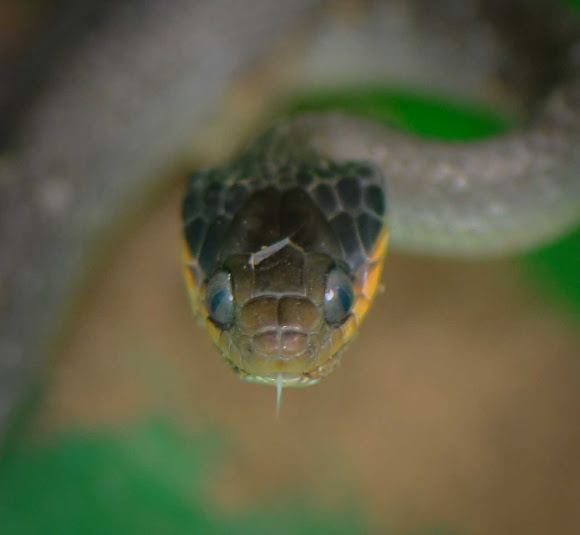 This is a 10-12 cm long (juvenile) and rather aggressive snake, found by some of the guards on my work. The head is just a centimeter in diameter, and the orange / yellow upper lip was stretched out before attacking the lens of my camera. This snake species can be identified by its olive green or grey body, multiple white speckles, its distinctive black head and red, yellow, white or black upper lip. It grows to an average length of 70 cm but may reach up to 1 meter in length.

There is a tradition of killing all types of snakes and other "dangerous" animals here in Mozambique (and also other parts of Africa). However there is a general fascination of those species too, so there is a possibility to actually change the behaviour by education. I managed to convince the guards (that caught those two snakes in a bucket for me) to release them in the grass a few hundred meters away... I had no time to follow up the actions, but I really hope that they did. Medical importance: This snake's venom has only minor effects and is not dangerous at all. No antivenom is required.

If this is an aggressive snake, I'm glad it could not hold a baseball bat :D

Aaaw! Bayucca! Superman! Thank you again!!! Research time for me, thanks to you dear!

Cant take the cred for it though, did not find it myself... But I hope to find out if it is poisonous or not, and how big it can become... It is very tiny and cute :)

wow, you got it!!! wonderful picture and snake :)