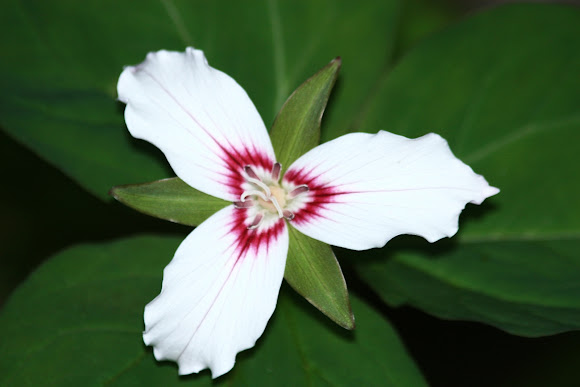 Trillium (trillium, wakerobin, tri flower, birthroot) is a genus of about 40–50 species of spring ephemeral perennials, native to temperate regions of North America and Asia. It used to be treated in the family Trilliaceae or Trillium family, a part of the Liliales or Lily order. The AGP II treats Trilliaceae as a synonym of the family Melanthiaceae. The above ground parts of Trilliums are scapes with three large, leaf-like bracts with the true leaves reduced to underground papery coverings around the rhizomes.

Typical species are Trillium grandiflorum (Large-flowered Trillium) in eastern North America and Trillium ovatum (Western Trillium). Both have white flowers that turn pink as they age.While it is a popular belief that it is illegal to pick the common Trillium grandiflorum (white trillium) in Ontario, in reality they are only protected in provincial parks and land owned by conservation authorities.[4] However, the rare Trillium flexipes (drooping trillium) is protected by law in Ontario,[5] because of its very small Canadian population. Trillium is one of many plants whose seeds are spread by ants. At maturity, the base and core of the trillium ovary turns soft and spongy. Trillium seeds have a fleshy organ called an elaiosome that attracts ants. The ants extract the seeds from the decaying ovary and take them to their nest, where they eat the elaiosomes and put the seeds in their garbage, where they germinate in a rich growing medium.

thank you very much friends :))