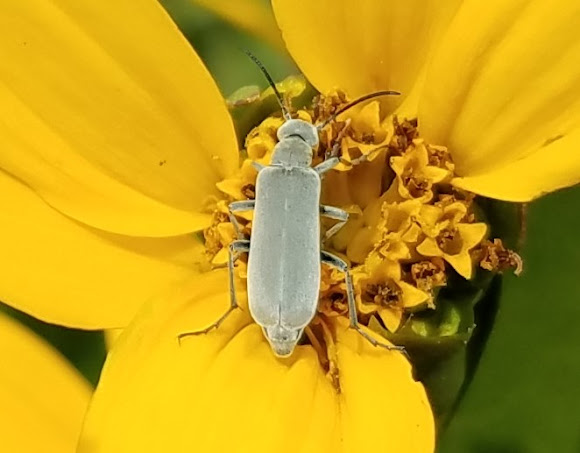 Adult beetles have narrow, elongated bodies ranging in length from 0.25 to 0.50 in. and are soft and flexible. Often the pronotum (the segment lying between the beetle’s head and abdomen when viewed from above) is narrower than either the head or the abdomen.

Spotted on a wildflower in central Washington.

Range is western North America (WA to KS). Blister beetles in the genus Epicauta have a complex life cycle that makes them highly effective biological control agents of several insect species, including grasshoppers. After feeding and mating in late summer, adult blister beetles lay eggs in areas of rangeland that may serve as breeding grounds for grasshoppers. After hatching from eggs, the highly mobile blister beetle larvae seek out and feed on grasshopper eggs. Through autumn and winter, maturing larvae become less mobile and more grub-like in appearance, and they develop a bigger appetite for grasshopper eggs. Eventually, the larvae complete their development and pupate in the spring. Adult blister beetles have chewing mouthparts and feed on a wide range of flowering weeds, including goldenrod (Solidago spp.), ironweed (Vernonia spp.), ragweed (Ambrosia spp.), and pigweed (Amaranthus spp.). Their feeding can be injurious to commercial vegetable crops such as potato, tomato, corn, carrot, melon, pea, bean, cabbage, and beet. They have also been reported to cause damage to alfalfa, mustard, and clover. Some species of blister beetles tend to congregate and feed in swarms on these crops, which can lead to concern for producers. Adult beetles can defoliate host plants, leaving nothing but leaf petioles and stems. However, this damage tends to be limited to the border rows of crops located adjacent to rangeland that has been infested previously with grasshoppers. Therefore, blister beetle feeding damage to vegetable crops and ornamental plants seldom necessitates implementing management practices. Many species of blister beetles produce a defensive substance called cantharidin in their body fluids. This substance is toxic to people, horses, cattle, sheep, goats, dogs, cats, rabbits, and rats. Surface exposure to cantharidin can cause skin irritation and lead to blistering. Of far greater concern is internal exposure to cantharidin, particularly by livestock that have consumed beetle-contaminated hay. Cantharidin can irritate the gastrointestinal and urinary tracts of animals, and lead to poisoning and even death. Horses are most susceptible to the toxin, and as little as four to six grams of dried beetles trapped in hay used as feed can be lethal to horses. (http://cru.cahe.wsu.edu/CEPublications/F...)