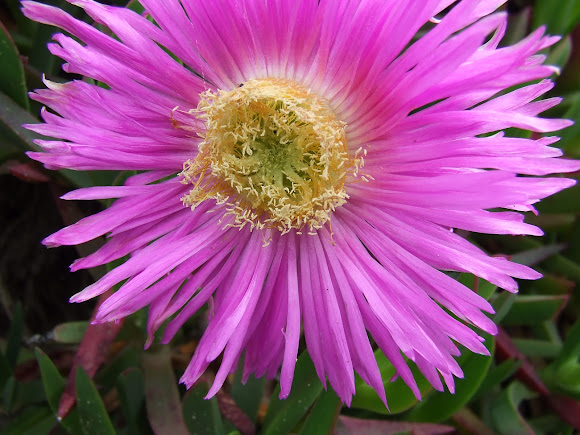 Carpobrotus edulis is a creeping, mat-forming succulent species and member of the Stone Plant family Aizoaceae, one of about 30 species in the genus Carpobrotus. Carpobrotus edulis is easily confused with its close relative, the more diminutive and less aggressive Carpobrotus chilensis (sea fig), and the two species hybridize readily throughout their ranges in California. The large 2.5-to-6-inch-diameter (63 to 150 mm) flowers of C. edulis are yellow or light pink, whereas the smaller, 1.5-to-2.5-inch-diameter (38 to 63 mm) C. chilensis flowers are deep magenta.

Range The Sour Fig grows on coastal and inland slopes from Namaqualand in the Northern Cape through the Western Cape to the Eastern Cape. It is often seen as a pioneer in disturbed sites. Ecology Leaves are eaten by tortoises. Puff-adders and other snakes such as the Cape Cobra are often found in Carpobrotus clumps where they ambush the small rodents that are attracted by the fruits. Flowers are pollinated by solitary bees, honey bees, carpenter bees and many beetle species. Flowers are eaten by antelopes and baboons. The clumps provide shelter for snails, lizards and skinks. Fruits are eaten by baboons, rodents, porcupines, antelopes and people, who also disperse the seeds. Growth Ice plants grow year round, with individual shoot segments growing more than three feet (1 m) per year (D’Antonio 1990b). Ice plants can grow to at least 165 feet (50 m) in diameter. Flowering occurs almost year round, beginning in February in southern California and continuing through fall in northern California, with flowers present for at least a few months in any given population. Seed production is high, with hundreds of seeds produced in each fruit. The fruit is edible. In South Africa the Sour Fig's ripe fruit are gathered and either eaten fresh or made into a very tart jam. Invasive species Carpobrotus edulis has naturalised in many other regions throughout the world, and is an invasive species in several parts, notably Australia, California and the Mediterranean, all of which share a similar climate. The ice plant has escaped from cultivation and has become an invasive species. The ice plant poses a serious ecological problem, forming vast monospecific zones, lowering biodiversity, and competing directly with several threatened or endangered plant species for nutrients, water, light, and space. Removal of plants Control of ice plants can be attempted by pulling out individual plants by hand, or with the use of earth-moving machinery such as a skid-steer or tractor, though it is necessary to remove buried stems, and mulch the soil to prevent re-establishment. For chemical control, glyphosate herbicides are used. Because of the high water content of shoot tissues, burning of live or dead plants is not a useful method of control or disposal. Mediterranean On the Mediterranean coast, Carpobrotus has spread out rapidly and now parts of the coastline are completely covered by this invasive species. Moreover, it has been shown that another invasive species, the black rat, enhances the spreading of the ice plant through its feces.As the ice plant represents a food resource for the rat, the invasive species benefit from each other (invasive mutualism).

spotted in the exterior of the river douro estuary protected area,it's a invasive plant,insects love it

Thanks Viv for one more id,this one was barred in my spotting list :)