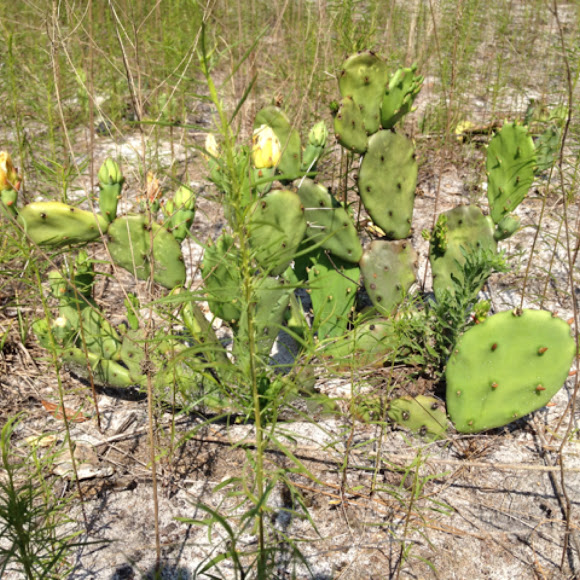 •Most prickly pear cactus have yellow, red or purple flowers, even among the same species. They vary in height from less than a foot (Plains, Hedgehog, Tuberous) to 6 or 7 feet (Texas, Santa Rita, Pancake). Pads can vary in width, length, shape and color. The Beavertail, Santa Rita and Blind Pear are regarded as spineless, but all have glochids.

•Prickly pear cactus are found in all of the deserts of the American Southwest, with different species having adapted to different locale and elevation ranges. Most require course, well-drained soil in dry, rocky flats or slopes. But some prefer mountain pinyon/juniper forests, while others require steep, rocky slopes in mountain foothills.

Cactus at home : •Be sure to water it every once and while, but not too often because it is part of a cactus, so it stores water. Maybe a place that is sandy. •What is that white stuff on a cactus? The cochineal covers much of the lower elevations in the western United States and Mexico. It feeds almost solely on the pads of selected prickly pear cacti species. •Prickly pear cactus is part of the diet in Mexican and Mexican-American cultures. Only the young plant is eaten; older plants are too tough.Also is used for medicine. •Prickly pear cactus is used for type 2 diabetes, high cholesterol, obesity, alcohol hangover, colitis, diarrhea, and benign prostatic hypertrophy (BPH). It is also used to fight viral infections.