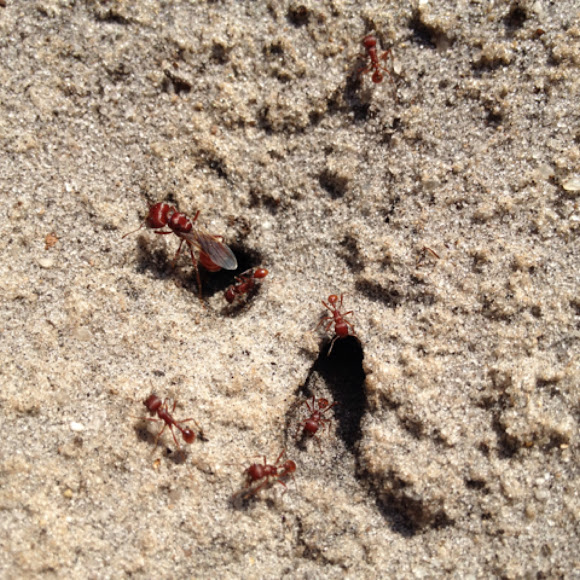 •fire ants produce hills or mounds in open areas where the colonies reside, although colonies occasionally occur indoors and in structures such as utility housings and tree trunks. Disturbance of mounds results in a rapid defensive response by worker ants, which quickly run up vertical surfaces. Worker ants range from 1/16 to 3/16 inch (1.5 to 5 mm) in length and are dark brown. Queen ants are larger (3/8 inch) and have no wings after mating.

•There are three other species of fire ants that are native in Texas: - the tropical fire ant, Solenopsis geminata Fabricius. - the southern fire ant, S. xyloni McCook. - the desert fire ant, S. aurea Wheelerand . •Life Cycle: Eggs hatch in eight to 10 days and larvae develop through four instars before pupating. Development requires 22 to 37 days, depending on temperature. Fire ants are social insects, and each colony contains one or more queen ants. Queen ants can produce about 200 eggs per day. A "mature" colony can contain over 200,000 ants along with the developmental and adult stages of winged black-colored male and reddish-brown female ants called "reproductives." These ants stay in the colony until conditions exist for their nuptial flight. •Pest Status: Sterile female fire ant workers can sting repeatedly; they first bite, and while holding on to the skin with their jaws, inject venom with stingers at the end of their abdomens; unique venom produces a fire-like burning sensation and most people react by developing a whitish pustule or fluid-filled blister at the site of the sting after a day or two; some people are hypersensitive to stings and should be prepared for a medical emergence if stung; most people can tolerate multiple stings but may have problems with secondary infections at the sites of the stings. Fire ants are considered to be medically important pests of people, pets, livestock and wildlife; they can also be damage crops such as corn, sorghum, okra, potatoes, sunflowers and others by feeding on seeds, seedlings and developing fruit.